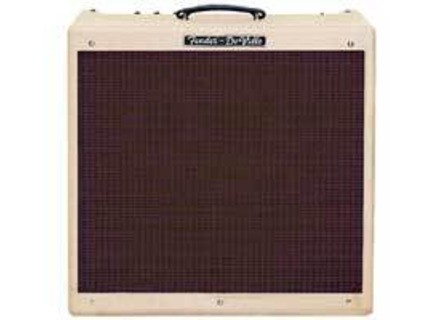 Fender Hot Rod DeVille 410 Tweed
4
This is a take on the famed Hot Rod Deville 4x10 combo by Fender. It features their tweed amplifier covering which they were known for in the '50s. It has a very distinctive look and feel and is right out of that classic era. Dig it? Otherwise the specs are the same as the standard Hot Rod Deville amplifier. It has 4 10" speakers, puts out 40 watts of power with 6L6 tubes, has two channels (clean and drive) and has onboard reverb as well. It's meant to be an amp that is versatile and can do a fair few tones from clean to mean all in one package.

Getting a good tone out of this amp is pretty simple. Fenders by nature are quite easy to dial in and I don't think this one is any different. The EQ is a standard Fender style tonestack (bass, middle, treble) and it really just takes setting them to taste. It can get a little bit dark if you roll the treble off too much, or a little thin with too little in the midrange, etc but that's all a matter of taste. The one issue I have with setting up most of the Hot Rod amps, especially the higher wattage ones is the issue with the volume, which can tend to jump rather quickly from 0 to 1, and 1 to 2. Make no mistake, this amp puts out a LOUD 40 watts and you have to be careful not to blow your ears off when you first power it on.

This amp was built to be somewhat of a gigger's machine. It's an amp that can cover clean and drive tones in one convenient package. The clean channel has a pretty typical Fender sound. It sounds a bit different from a Twin RI or Deluxe RI but overall it's not too bad by any means. It has a little more punch to it, especially in the midrange. Classic Fender amps tend to have a very woody and subdued midrange, whereas this one is a bit more strident sounding. The drive tones are nice as well. They range from classic and clear to higher gain. It's not a rough and tumble type of high gain, I found it excelled best at smoother lead type tones, especially with a boost in front. It's not the type of amp that a hard rock or metal player would use primarily, but rather someone who plays blues or classic rock perhaps.

All in all I think the Fender Hot Rod Deville 4x10 is a great amp for someone who's looking for a slightly thicker take on the Hot Rod sound (4 10"s as opposed to just 2 12"s) and wants the really killer looking tweed look (c'mon, it's classic Fender) on top of that! The original Hot Rods have been superseded by the newer Hot Rod III series, but you can still pick up one of the originals for $600 or less which is a good deal considering the quality of tone. Definitely have a look if you get the chance.
Did you find this review helpful?yesno
»