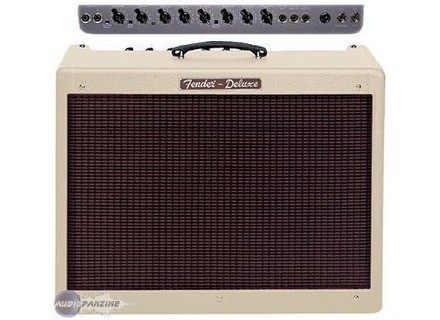 Fender Hot Rod Deluxe - Blonde & Jensen Limited Edition
4
I bought this Fender Hot Rod Deluxe from Musicians Friend about 2 months ago for $429 (in the dent & scratch section). I already had a 4x10 Blues Deville in Tweed. Since the Deville weights a ton, and in most of the gigs that I play with my band I don't need the amount of power packed in the Deville, I decided to go for something smaller, but that would keep the same punch and tone of the Deville.

The Hot Rod Deluxe has essentially the same sound characteristics of its bigger brother, the Deville. Exceptional clean tones, and a bluesy fat sound in the drive channels that hooks you in the very first time you plug your guitar. The amp is smaller, lighter and easier to handle that the Deville. Also, because of the lower power (40W against 60W of the Deville), you can extract the most beaultiful tone of the tubes (with the volume around 5) at a decent bandwise volume, without becoming deaf (if you like your eardrums, don't do that with the Deville - I never set the volume higher than 3). And the cream colored blonde tolex is one of the coolest things you'll see in guitar amps.

I had a negative surprise when I saw the "Made in Mexico" label in the back of the amp. Apparently Fender moved all the production of the Hot Rod Amps to Mexico. Putting aside any sort of prejudice, I figured that the crafting quality of the amp hasn't been reduced. I coudn't see any production flaws, as we typically see in "Made in Mexico" Fender guitars. The dust cover would be much nicer if it would be brown (as in the old Blues Devilles and Deluxes from the early nineties) instead of the black that comes with the amp. That is because all the details are brown (the handler, the grill cloth).

Good construcion. It is made of plywood, but the tolex hides completely the low grade of the wood. Anyway, nowadays solid wood amps cost a fortune.

Good purchase. Worth the bucks.

Fender Hot Rod Deluxe - Blonde & Jensen Limited Edition
5
This is a a Fender amp at its best. Not only the best looking but also the best tone for a modern Fender amp. This amp is a custom amp that features the blonde tolex covering and a brown grill cloth. You get all the same features and tone as the standard black ad silverface but just in a more blues based cosmetic job.

There are a couple new features in the Hot Rod Deluxe lll that are very important to me. The first one being that speaker that is standard is actually usable. They used to have some cheap speaker in there that wasn't very musical and a lot of guys would switch out the speaker for something much more sweeter in tone. The next feature is a usable gain channel two and three. Before they gain channels were so bad that I never even used them. They sounded terrible and nothing like a tube amp distortion

The custom piece has the same tone as the black standard but one minor adjustment with superior results. This amp has a better tone that the standard simply because of the better speaker. The Jensen is a far superior speaker to the Celestion for this style of amplifier. Now that they have a usable gain channel then this amp has much more flexibility that before. The old amps were just outright sloppy. I'm not sure if they fixed the jewel light from going out on this model. Everyone who owned this amp knows that the light always goes out on these things.

Anyway, use this amp with any nice guitar. I like this amp with a solid Gibson Les Paul. I used it with a Line 6 Dl4 and a Ibanez Ts9 and I had some great tones that cut through the band quite well.

These are a limited run so they are extremely hard to find and sometimes impossible. I have seen them go for around $800 new or somewhere used for about $500. They keep some value in the used market due to their cosmetic look. These amps from Fender sometimes are even exclusive to certain stores and online retailers. So hunting one down in this setup can be a challenge. They are very cool looking and fit the tone of the amp better in my opinion. I would recommend this over the black standard as the speaker is better and the tolex is very unique.