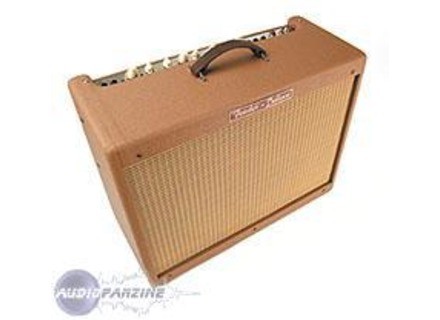 Average Score:4.8( 4.8/5 based on 3 reviews )
Not satisfied with those reviews?
Our members also liked:

Fender Hot Rod Deluxe - Brown & Jensen Limited Edition
4
I bought it in a loca music store, in Norway, where I live, for about 8000 Kroner, which is the same as 900US$.

This amp really has a stunning amount of power! I've played at stages outside using only a third of it's capacity! The reverb is also remarkable, and the clean sound is unbelieveable.

The knobs on this thing is WAY too sensitive...At least at the lowest levels, which make me a bit of problems when I want it to whisper in my bedroom at nights. This is not a big problem though, more a little annoying thing that seem to bother me.

The other thing about this unit is that it doesn't sound good with many distortion units...This has caused problems for me when using e.g. the Big Muff Pi, or the Boss MT-2 Metal Zone. The built in drive-channel of course gives you warm overdrive-sound, but it doesn't give enough if you'll play hard-rock! I think the problem with dist-units is that it colours the sound too much in the preamp-tubes, and you end up with a bit unsatisfying distorted sound.

The Deluxe is made of good quality wood,and is really good put together. The DogBone handle is also nice and sturdy, but this is a heavy piece of equipment for a small guy like me...(25 kg) It has to be mentioned that this is a tube-amp, and therefore it will have to be cared for, and not be roughly treated.

A nice guitar amp of supreme quality,but if you want the metal-distortion, you MAY struggle a bit. (unless you're an effects-expert)