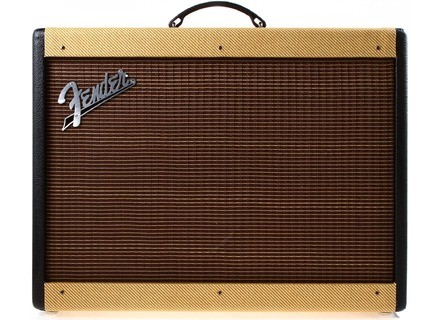 Fender Hot Rod Deluxe III - Two Tone Black and Tweed Limited Edition
3
Ok this is amp that I have owned two of which one was American made and the other Mexican made. There was a big difference in the two. The American was just as sloppy of a distortion tone as a $99 solid state amp from Line 6. The tone of this amp was brilliant on the clean channel and accepted pedals quite well. However, the second and I guess third channels were just atrocious. It was virtually pointless to play this amp on anything other than the clean channel. This amp features a cool vintage throwback tweed tolex job. It really gives the amp a lot more character and vibrancy. I almost prefer this on the blues version but on the hot rod is great too.

This amp sounds much better than the previous version of the series. The tone of the amp and especially the distortion channels are actually usable now at this point. Before the sound of them was simple terrible and you just could not use it with any confidence at all. Now they have retooled the sound and what not to make this an actual multiple channel amp where the first versions were multiple but not usable. I would take this now if it were made in the States but since it is not then I will pass on it.

You can find these new for right at around $799 which isn't a bad price for a good sounding amp. This is an amp that I think wold be very competitive with some of the Marshall multiple channel combos out there. There really isn't much to compare this amp to other than some boutique builders that use quality parts at hand made factory shops for a lot more money.
Did you find this review helpful?yesno

Fender Hot Rod Deluxe III - Two Tone Black and Tweed Limited Edition
4
There are a couple new features in the Hot Rod Deluxe lll that are very important to me. The first one being that speaker that is standard is actually usable. They used to have some cheap speaker in there that wasn't very musical and a lot of guys would switch out the speaker for something much more sweeter in tone. The next feature is a usable gain channel two and three. Before they gain channels were so bad that I never even used them. They sounded terrible and nothing like a tube amp distortion. This new look to this amp is quite remarkable as well.


Now that they have a usable gain channel then this amp has much more flexibility that before. The old amps were just outright sloppy. The bad thing is that these amps are made in Mexico. So they are going to be cheaper made and will break down on you a lot quicker. I'm not sure if they fixed the jewel light from going out on this model. Everyone who owned this amp knows that the light always goes out on these things.

Anyway, use this amp with any nice guitar. I like this amp with a solid Gibson Les Paul. I used it with a Line 6 Dl4 and a Ibanez Ts9 and I had some great tones that cut through the band quite well.


If you are on the market for a good tube amp that has two moderate low gain but usable gain then this might be the amp for you. However I would never buy this amp since its made in Mexico. For the price of this amp I would buy a used Marshall JCM2000. At new these amps come in at around $799. You can even pick up a Peavey 5150 for the price of this thing.
Did you find this review helpful?yesno
Cookies help us improve performance, enhance user experience and deliver our services. By using our services, you agree to our use of cookies. Find out more.