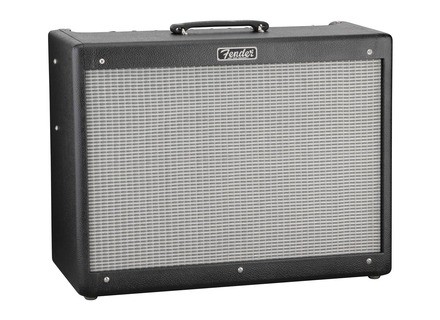 Average Score:4.2( 4.2/5 based on 5 reviews )
Buy this productView price information >
Not satisfied with those reviews?
Our members also liked:
Buy at Amazon

guiguiof67's review (This content has been automatically translated from French)" I recommend!"

I use it for every type of game, but is rather oriented blues / rock.
If you want to go out of his big fat heavy or hard rock, will have to add some effects pedals has, but the sound is stunning.
I love the Fender sound, is the depth, medium and treble are beautiful and it is really easy to settle for quelqun who used to play.

I do it again tomorrow if this choice he had to let go.

The sounds are very crystalline, very dynamic with incredible depth.
Even with an electro acoustic sound is great!!

I love the clear sound of this amp through the body

Fender Hot Rod Deluxe III
5
The Hot Rod Deluxe III is a 40W tube amp (3 Preamp 12AX7, 2 6L6 power), with a big heavy firepower, which prohibits virtually flat in the game ... Specifically, it is hard to set ultra low volume, between 0 and 1 and a half (/ 10). It is better to lower the pickups or the guitar back on the input 2. Beyond 2, we already feel the room around and it will collapse just as repeated (according to your classmates). Frankly I have never been beyond 4, even in concert. Hearing loss without caps

. From what I've seen, the volume curve is not linear, rather asympotique, ca sends very strong at the beginning and after one gains little volume and crunch it naturally.
I had a Marshall TSL 60W tube which was much more malleable on this aspect.

Side inputs: two inputs jacks (the 2 being less sensitive, so a little less volume and shine ... I think). An effects loop.

No line out. A little damage to the home recording or dub live on a console, but hey, we can do without.

A clear channel with volume control, an overdrive channel with adjustable saturation levels and the volume (or two if we consider that we have the option drive / more drive).

A single EQ for the different channels (treble, mid, bass), also a shame for those who want clear and distinct rules od.

Overall, very good. Apart from the volume, the other knobs are precise and allow a wide variety of sounds.

Very easy to use: one branch, we play, it sounds already hell. No need for manual, even if Fender provides several examples of config in different styles of music, which can help.
The footswitch allows selection provides the clear channel / drive / more drive. Robust and efficient.

Is perfect for my style (funk pop rock): very nice clean sounds, this is mainly why I bought it. And I'm delighted: the heat, sharp chiseled good, sensitivity terrible ... Side O / D, I must say at first I was really struggling: she seemed vague and not very powerful. And I took a Visual Sound J & H 2 to compensate. But in recent weeks, I went back on that channel and reflection, there is good: a good crunch a little runny, blues rock type, which, in this register, seems really interesting.
Those seeking a real distortion, saturated fat, accurate, acute ... are bound to be disappointed but in a field more soft rock / blues / funk, I think it sounds pretty good actually. In the studio, recorded recently in securities, I even opted for the Hot Rod OD rather than the J & H.
I use an ESP Eclipse II (two double EMG), mainly on the bridge pickup with this amp (if not, almost too low ...) and the following effects: MXR Phase 90, Boss DD3, Crybaby GCB95. Nothing to report: everything goes well.

And a small review which had given me want to buy:

I use it for six months in rehearsals and concerts, if it again, it would without hesitation! I love the clean sound, I began to appreciate the overdrive. I like the look very Fender, the canvas before the HP Silver, large knobs and the footswitch though strong, the little red light a little vintage. Moreover, it is not very heavy (compared to my previous Marshall 30 kg ...). In short, a very good choice, as far as I'm concerned.

For home use, I think it's really oversized, unless you are deaf or Voison relatively far. A priori the Blues Junior is more suitable and I would probably see that side in this case.

Can be blamed a lack of line out and a common equalization for two channels, but you get done.

PS: Note that I just had a failure (weld redone on channel O / D, which gave no sound ...), which is pretty rare for a Hot Rod. He was still under warranty, but I was a little surprised.