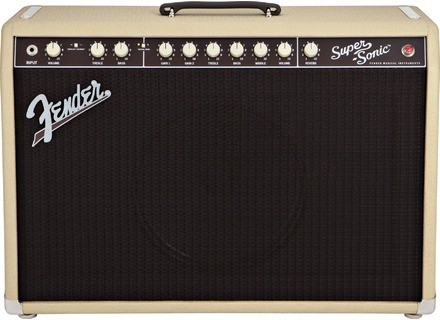 Fender Super-Sonic 60 Combo
5
This amp is a 60 W (all tube) with a solid state rectifier . The channels for clean are Vibrolux, and Bassman - with another channel called 'Burn' for distortion / overdrive. The Burn channel has 'cascading gain' , or two gain pots to dial in your distortion sound. This amp sounds better than my Fender Twin Reissue on it's clean channel, which is just amazing to me - because the Twin has 2x12's, the SS only 1x12 -- and I just had new tubes put in it and Bias'ed so I know WTF I am talking about. Not that the Twin sounds bad! Don't take me the wrong way. I just prefer the tone, response of this amp - and playing through the bassman channel of my SS now, and I had the Twin for 5 years... Twins' are great amps, and go for more $ used because I think that more people know what they are thus they are in more demand at this point in time. With 10-15 years behind us I believe that this amp will go UP in value, because it really does sound fantastic and will be very sought after once musicians realize what they missed out on.

Remember that you have to break in that Celestion V30 though, it took some time for it to sound good after working the speaker for a while - they loosen up or something, and sound better. I almost replaced the V30 in the beginning, so just stomp on that bad boy for a while (play some bass rich stuff through it) and it will be broken in enough to sound like it should. Seriously. Look it up if you don't believe me, i'm not the first person to comment on the unbroken-in V30 speaker aspect of this amplifier.

I rarely take the amp off of the Bassman channel, because it sounds so good and has more of a mid-scoop (bass rich) tone, which is why Guitar players in the late 60's-70's ditched their amps for the bass player's bassman rig. I think this amp sounds better than the Fender Twin Reissue I have in the same studio on the bassman channel, but not so much on the Vibrolux, though it probably works for clean / telecaster / country blues type of stuff. I'm more of a Pink Floyd head, so I run a Digitech 2120 for my 'Chandler Tube Driver' distortion tone into the clean Bassman channel of this amp.

It sounds FANTASTIC at both bedroom levels / studio sessions and on stage -- and to boot I get praises all of the time for the tone coming out of it, and of course it's 'vintage' looks. I think people get confused, and often think that it's a vintage fender, which of course I like! Instead of opting for the Black Tolex, I got blonde -- which I sort of regret now. There is a reason why so many amps are Black Tolex'ed. It doesn't show ever little scrape, mark, etc... but the blonde tolex --- well, it does. So you get the idea.

I use a digitech 2112, upgraded e-prom chip to make it the 2120. The digitech out through the bassman channel does everything I need - Sounds great for cleans, blues, overdriven stuff and even a mesa boogie-esq / metal rhythm tone with it - though I am not a metal player.

When bypassed, the amp sounds fantastic too with the clean channels. I'm not a huge fan of the 'Burn' channel , as volume is decreased (though there is a mod for this) ; and the distortion tone though it does have cascading gain doesn't sound as good as my Fender Twin. I still like it though, and I could see it as being a useful channel for blues, and classic rock .

The cleans are what REALLY make this amp shine. It's like having two really nice vintage fender cleans in one, which I just love. Fender did their homework, and gave a blues / classic rock guitar player exactly what the doctor ordered on this one. I've even played this amp next to (a real Vibrolux) on the clean channel, and they nailed it. Really. The Bassman channel also sounds like the original amp as well. Fender remained true to what they built their name on -- great sounding tube amps. LOVE IT.

Volume knob (like on almost all Fender tube amps) gets really loud at '2', which i've heard there is a mod to fix. It's kind of annoying though, because it gets REALLY loud with just a minor adjustment of the Volume knob. That could be an advantage for some, but not myself. I leave it on 2-3 and adjust volume now through the Digitech unit.

I tried TONS of amps before I settled on the Fender SS 60 watt. Played almost all of the Fender tube amps, mainly because of the clean channel which I knew would be excellent for running my FX through.

Sounds wonderful with Analog pedals too. I've been playing for years, and I have a Tube Screamer, a Chandler Tube Driver, and some other stuff I use sometimes with it. All of em sound like they should.

Fender Super-Sonic 60 Combo
5
I went to San Antonio looking through all the music stores in town,we finally got to Hermes Music as I walked around I picked up other guitars and none of them felt right. I walked up to a display of Squiers and I saw Marcy *my guitars name* so I picked her up and plugged her in and began to play. The sound was awesome and she felt right. She cost a total of $190.00!! She wasnt used she was new. My friend Becca told me that she was a good choice and would become a life long friend. Marcy and i have been together for almost a year.

I like the way her body is shaped its cool. I also like the fact she has a really thick pic guard. The coolest thing is she cost so little and all these other people paid so much, heehee, i rule.

I dont like where the switch nob is placed it gets on my nerves when i play. Also I wish there where numbers on the nobs so I could see how loud she is before I wake up everyone at 2 AM. Other then that she has been great.

Marcy has been very well to me. I have dropped her and she hasn't been hurt. She goes everywhere with me, she has even been to North Carolina and Tenn. She did very well on the airplane. She didnt get sick or anything.

All my thoughts together, here we go. Marcy has been a very good buy for me. She plays very well and can take my abuse of lugging her around everywhere. She has a nice build and is a good guitar for me. I have to say to the people who payed way to much money for their guitar. SHOP AROUND!!!!!

Fender Super-Sonic 60 Combo
5
I bought it yesterday, I had to order it from Holland, but the warehouse had moved to England so I had to wait extra long. Allthough, It was worth it. Cos since I saw a photo of it on the internet (while searching for my dream guitar) I was shocked! "-There it is" I quickly called fender Sweden, and they only had one left! Last in production, they said it stopped being produced 98. I was lucky. As soon as I intonated it to my way of playing and took away the "Swai" tremolo stick I've been sitting unstopable playing my little darling till fingers bleed. It's even better than any other fender I've tried, And the sound is there!

It's not big and clumpsy like all other guitars I've played, very light but solid. It's got 2 Humbuck's that sounds awesome, clean, fat, warm, also distinct if you may, with a 3-way switch. It's got a nice Frequenzy area to work on, very easy to adjust. This guitar is the shit! My absolute darling!

The 3-way switch is in the way if you have the guitar low, as I do. I am use to getting the manual of every new item I purchase, in this case I didn't (I don't think there is one) but I would really like to have an instruction on how to adjust the stable better. If anyone knows send an e-mail (sidewinder@atari.net)

Oh yes! Why do they always put on crappy strings to the first buyer??
I payed $570 USD for it, thats not a negative one. It's just that I'm not that rich. It's worth the money!

All Fender hardwares, solid as hell!" and its black as the darkest ocean with a white plectrum-protection. The neck with frets is smaller than average (not that much) and the head is the shape of a mustang, but upside-down. Oh, man I'm a terrible describer.

I own my dream-guitar! Not many can say this. I have ordered one more! the Blue-flake one. Haha, I just love this guitar!

Fender Super-Sonic 60 Combo
4
This is one of the very best modern amplifiers that Fender has put out. This is more of a high gain amp for Fender but still keeping the vintage clean tones they are so famous for having. The amp have quite a bit of features compared to some of their more vintage styled amps. This one has a fat boost switch and also a reverb to add a bit of depth to the tone. I would call this a vintage modern amp for Fender.

I like this amp with all kinds of guitars, but mostly I like it with a Fender Stratocaster or a Charvel San Dimas or Socal. I like the light to medium tone of the ash and alder body woods. This compliments the nature of the amp quite well. The clean is very Fender sparkly and jangly. Then you go to channel two and having two gains is almost heaven. This is something you see on several boutique amplifiers. Suhr amps like the PT100 has a similar thing but theirs acts like another channel. This one just gives you deeper and juicy gain distortion.

If you need a god clean tone and a hot rod gainy distortion channel then this is your amp. The clean is remarkable and the gain has so much variation with the dual gains that is makes this amp a lot of fun to play.

At new these amps come in at around $1399. Not a bad price for the quality and usability of this amp. Having two channels and both are exceptional is a big bonus. I would recommend anyone to go and try this amp if you get the chance. You may or may not like the voicing but it is a solid amplifier.

Did you find this review helpful?yesno
»
Read the 7 user reviews on the Fender Super-Sonic 60 Combo »

Published on 06/27/10
The new and updated 1x12” Super-Sonic 60 Combo offers the same features as the Super-Sonic 22 Combo, but kicks the power up to 60 watts and is fine-tuned for increased bass response and fatter tone, …