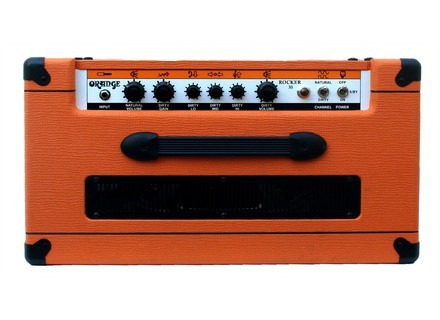 Orange Rocker 30
4
The Orange Rocker 30 combo is one of the more stripped down amps that they've built recently. It features two channels, natural and dirty. The natural channel has just a volume control, whereas the drive channel features gain and volume controls. They share a very simple EQ setup of bass, middle, and treble. There's no onboard reverb or effects to add to the equation, just pure and simple tone. It puts out 30 watts of power and is run on a pair of EL34 tubes. Simple, yet effective. The combo version of this amp features a Celestion Vintage 30 speaker, the industry standard when it comes to many amps.

Getting a good sound out of this amp is pretty easy. I've been using one of these to record my solo album, and it's really quite interesting how good it sounds. I owned a Rockerverb 50 for a while and never did gel with it, but this Rocker 30 sounds fantastic. Both channels are pretty simple to get good tones out of. Sure it doesn't have the flexibility of some of the other multi-channel amps on the market, but that's a minor sacrifice when you consider that each channel seems to have a great sound without much tweaking.

This amp is definitely akin to a fireball when it comes to tone. Everything about this amp tonally has a certain fire to it... lots of power and tone even for such a small and simple package. The natural (clean) channel sounds pretty good, but even considering that, it does have bit of dirt lurking within the sound spectrum which serves perfect for grittier bluesy or rocky tones. The drive channel is pure raunch heaven. It's quite high gain, but the overall vibe is very vintage and clear even with the gain dimed. In that respect it's a little more like a vintage amp that's being hit (overloaded) with gain stages. The tones are cool overall, and if you want a vintage voiced high gainer that has gobs of saturation but still has a loose and raunchy British vibe, check this one out!

All in all I think the Orange Rocker 30 is a great amp for anyone looking for something in a reasonable package that combines simplicity with great hard rock tones in the loose and killer British vibe. This amp is now discontinued but can be had in the combo form for under $1,000 if you look, which is definitely a great deal. Grab one today!
Did you find this review helpful?yesno
»

Orange Rocker 30
4
I have played guitar for several years, and haven't been impressed with digital effects and modeling until now. I decided to try the Orange Amp Rocker 30 out at guitar center one day and was amazed at the wide tonal spectrum available. I think it's important to note I believe this amp sounds better than any multi-effects processor I have heard (old or modern) because from input to speaker everything is designed to go together which I believe maximizes the final tone of this unit no matter the model or preset. The presets based on songs from the 50's through modern day sound great, and offer a great starting point to create your own tone, or to practice those particular songs.

Programming the unit is very easy as is adjusting the presets. This amp gets very loud, I haven't had it past about 1/3 and that was more than enough for me to worry about neighbors in adjacent houses being bothered.

There are a few bugs that bother me though . One, certain presets sound almost the same no matter which pickup combination you use or where your guitar's volume or tone is set, but then some react the way you would expect from a regular amp. Also the built in noise gate is a good feature, but sometimes reduces your sustain. Compared to a tube amp (which I own several) this amp comes awfully close to the tone (especially the fender-esq tones), but is a little tighter and edgier sounding (which is more apparent with the more gain used) – however it is still acceptable no matter what. Also the flange effect really isn’t that good, but that seems to be the only one.

Overall I believe this amp influences my creativity because I can go from Rolling Stones to Metallica to Guns and Roses with the push of a footswitch button (programmed in the order I want). Check out line 6's website for the possible sounds then go try it out for yourself, you won't regret it

Orange Rocker 30
4
This is a pretty well-respected tube amp, made by Orange Amps. It only really has the 1/4" input, as its the combo version. There are no other external speaker outputs. There are 30 watts of power delivered to this guy. The interesting thing about it is that it has 2 channels, natural (clean) and dirty (distorted). However, the natural channel only has one knob, for volume. The dirty channel has volume, gain, and EQ.

I like this amp the best with the Les Paul. It's not that impressive with a Fender, except on the clean channel, but even then, the natural brightness of my Strat is too much for it. This is when I wish I could EQ the clean channel. Anyways, with the Les Paul, I could easily get a great clean and dirty sound. In fact, my favorite sound is when the clean channel is pushed to the limit, as it produces a very 60s sounding Garage-rock/British rock tone similar to The Who and the Yardbirds. When plugged in, this amp recalls the classic tones of the early 70s and gets super heavy. It really manages to wipe the floor with most amp distortion. I definitely am very impressed with the raw power of this amp. However, it is a bit predictable, and getting a wide range of tones from it is not easy, which is why I tend to prefer pedal distortion nowadays.

I think that this is a great-sounding amp, and I know that there are many players out there who wouldn't need any other amp (there was a time when I myself fit this description). I think that mostly, my beef lies with how little versatility it has. There is no room for anyone who plays anything other than classic rock era stuff. Therefore, I wouldn't personally get much use out of it. I think that many people would enjoy it, though, and it's been popular enough to warrant that assumption. Check it out if my description interests you.

Orange Rocker 30
5
(Originally written by gp54/translated from Audiofanzine FR)
30-watt tube amp with three 12AX7 preamp tubes and two EL34 power tubes. One input, two channels. The clean channel only has a volume control. The dirty channel has a gain control and a 3-band EQ. The combo has a standby switch to warm up the tubes. It has one 16 ohm speaker output, two 8 ohm speaker outputs and a footswitch connector for channel selection.

It's a simple and effective amp but I miss an FX loop (like on the Rockerverb 50).

Very easy to use: power on the amp, wait until the tubes are warm and start playing! The amp provides a good natural sound, you really have to try to get a bad sound. No user's manual but you won't need it!

I play with a Gibson Les Paul Classic and a Fender Strat Highway One and the sound is great. This amp provides a real good sound considering its size.

The dirty channel is THE reason I bought this amp. The response ranges from slight crunch to straight rock sound. I'm sure the gain of this channel isn't enough for heavy metal players, but they can still get their favorite sound using a good distortion pedal with the clean channel. The sound is really excellent. It has a lot of presence and huge dynamics I had never heard before!

The gain control is also great because the dirty channel starts to crunch you set it to 3-4 and it gets really wild when you get to 6. If you set it to 3 you get ZZ Top's La Grange sound, at 5 you get AC/DC, and at 6 you get Airbourne! The sound range is very wide. You'll get the best results with 80's and 90's rock. The frequency response is well-balanced and it provides strong low-mids which help your instrument to cut through the mix.

You'll have to crank it up if you want to get the most value out of it: a killer sound! But you can also play at home thanks to the very responsive master control.

I've been using it for two months and it's a really good product. I bought it because of Orange's reputation. I'm a believer!

I like this amp a lot for its sound character and its huge dynamics.

I previously tested many tube amps: Marshall JVM, Laney, Vox AC, etc., but if you're looking for a pure sound and a huge dynamic response, I strongly recommend you Orange!

Of course I would buy it again. But if I had more money I would choose the Rockerverb 50...
Did you find this review helpful?yesno
»
Read the 21 user reviews on the Orange Rocker 30 »