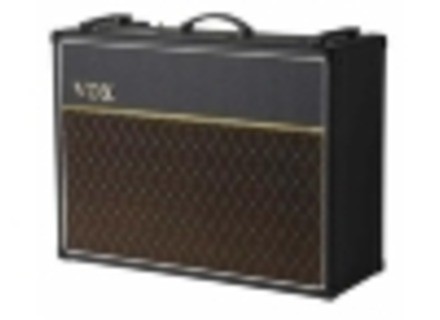 Vox AC15C2
All-tube amp.
2 channels, one normal and one boost.
The difference between the two channels is actually EQing settings and especially the level of crunch

Is allowed to warm a little amp for the lamps are temperature, one branch and it sounds now!
Few settings equations but very effective.
Bass and treble for boost and cut tone for the normal channel.
But do not expect to have a big distortion natively, it is still a crunch, even on the boost channel.
For my part, I use a pedal on T-rex Mudhoney2 for a true big distortion.
But my clean sound is incomparable with this little crunch of lamps which gives a warm, accurate sound.
Very powerful, 15W more than enough to play over a battery with a lumberjack in charge!

Never touched the manual too easy to adjust intuitively.

I play it with an Ibanez Jet King hollow body.
I get a good vintage sound as I wanted, but powerful.

Weaknesses:
2 channels are not switchable directly. For this I go through a pedal switch with 2 outputs, one for each channel.
Lacks some settings in serious to the normal channel.

I do not regret my purchase.

Artsurf's review (This content has been automatically translated from French)" Very good amp for the Rock!"

It is almost the same measurements and the same weight as the AC30 (32 kgs).

The Normal channel has a volume and that's all. The Top Boost channel: Volume, Bass Treble.

On the Normal channel, I regret that there is no tone control, so I am using the tone of the guitar.

The configuration is simple, but we can question the fact of not having a single input and a switch with two channels (!?), So he must have an AB Box + cables.

The manual is well, except that no mention of changing lamps. According to the net, it is a autobiased amp (not found the info in the manual).

The Master knob crachouille a little from time to time.

The Normal channel: from Fender, I put a little time to adapt to it's clear that I will not venture to describe.
That said with my 3 guitars, it does, each in their registry (Gibson LP Studio, Stratocaster Classic Player 60's MusicMan SUB1), according to the microphones, the Tone settings ...
I still prefer the clear sound of my Fender Champ 25 which is much lower loaded.
However, the clear sound of the Vox is good, it has its own personality and is not as flat as that of Marshall.
It is only rarely (especially with humbuckers) 100% clean, and this is for me the value of the vehicle, as soon as we can attack the strings a little to gently cruncher. This is great because you can really qualify his game and put more or less intensity.

The Top Boost channel: good well then this is the total foot, it is accurate, it rocks, it is sharp, short, I'm very excited. It's hard to put words on it, especially as I had little to compare amps.

In fact I played for many years on Tonelab and I find myself very comfortable on the AC15, especially with regard to the crunch and overdrive. The nuances of the game are respected.

The tremolo for me, the reverb may lack a bit of "precision", but it does.

Compared to what I've experienced before, I think it lacks a bit of bass, but it is also what makes the signature of the amp. We adapt his game and his repertoire accordingly.

I use it for ten days, so an update will probably be necessary.
But since nobody has posted opinions about this amp ben ...

What motivated my choice:

- Sound Vox that I discovered on the Tonelab
- A fairly complete amp, especially with two channels, a Master Volume to control the power effects (tremolo, reverb), 2 HP.
- A tariff (€ 650 paid in nine) seems entirely appropriate (except that you buy a box + the AB footswitch optional) appearing in a flawless finish.
- A usable power at home (not yet tested group).
- Crunches and overdrive


I tried the AC15C1, which still lacks chest.

The contribution of 2 HP is undeniable, it gives volume, circulation space incomparable.
Due to the low power (15W), it may well work lights, and give all the warmth of a great tube amp.
It is still in its saturated it does it better.
Warning: can not push too normal channel volume with humbuckers, because when you put the volume knob to 10 o'clock, "it crunchouille!" Depending on the style of play, there may be a significant difference in volume between the two channels.

In the negative, regrets, questionable choices:

- No effects loop
- Weight (it's a bit of muscle!)
- No Tone for the normal channel

With the same budget I remake this choice. I hesitated with the Blackstar Studio 20 which is very nice, but I prefer the Vox channel saturated, which is more vintage. After that, maybe in six months I have a different opinion.

I hesitated with the AC30, but he seemed too powerful.

For me, this is a very good amp to rock!