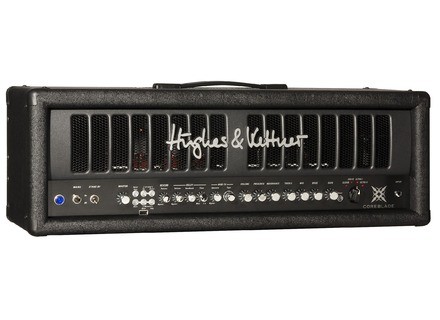 Hughes & Kettner Coreblade
4
This is by far one of the most versatile tube amp in the world. This amp is such an interesting feat of technology that it still amazes me as I'm writing this. This amp has a midi support built inside that takes 128 user presets. This is much like a midi foot controller that you would have on your floor in front of you during the gig. It also has a USB drive to use to change presets via your computer and slip them back into the amp. Next it has the ability to take either El34 power tubes or 6l6 power tubes. Then finally, it has what is acronym TSC, which is a features that detects tube failure and shuts off that tube from the circuit. A fantastic feat of technology that remains all tube tone and no modeling.

The tone of this amp is monstrous. You have four channels one for clean and the other three for gain. You have a drive channel and then an ultra channel and then a mega ultra channel. The distortion is so over the top but also very usable. You have more than enough gain ofr any style of music. But I guess the idea is to put more in there so no one would complain about not having enough. Even though too much sounds like garbage in a band setting.

At new you can find these amps for right around $2499, which isn't too bad for a four channel amp with load of features and options. This is the kind of amp that gets a lot of praise from some people and criticism from others. It is modern amp for technology and amp that features some nice usable options. I would recommend this amp to a metal or hard rock player who wants everything in one convenient package. You have effects and storage for covers songs if you do that. This is a gigging musicians dream amp.