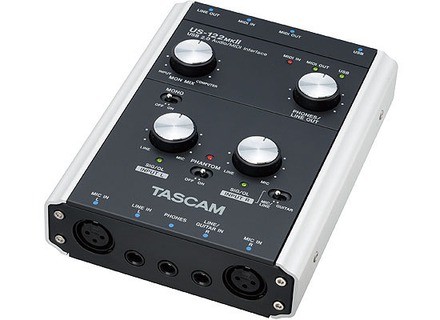 Tascam US-122MKII
5
Brand reputation, and advice given by sonofrance after a long search, I play live with a TH2 overloud portable asus dual core laptop on vista os

1 month
no
good price/quality ratio&nbsp;
Yes
Did you find this review helpful?yesno

Tascam US-122MKII
5
What characteristics have motivated your choice?
I needed an audio interface with stereo input for entering the output of a mixer, but also an interface to record from time to time to play guitar and bass (equivalent to a TonePort), I So I opted for this model

With which instruments or systems (console, preamp, DTD ...) do you use it with?
To record my group, I am returning the output of a mixer over, and I record what comes directly from the table. For my personal records, I use it with an electric guitar (Yamaha AES620) and an active bass (Ibanez SR 700)

For what purpose?
Record myself and my group, to play without having to use a huge amp too and to play quietly to play headphones, without latency. (No latency if it plugs directly into the headphone output)

What is your config (Motherboard / CPU / Ram / Disk ,...)?
Now I am running a MacBook Pro 2011 with Ableton Live 8, but before that I was under Windows which was not very powerful Windows that had 3-4 years, and it worked fine too, depending on use, but generally with ASIO and Ableton, it runs pretty good, the power has little to do with it in the end

The drivers are stable?
No crash for 3 months now and I've had several recording sessions. Daily use, pops in early use, but some settings in the buffers and asio and here we go!

What latency you get?
If you go through the large loop and we do TascamAbletonEntry Monitoring Tascam, we had a latency of a good second (both with my old PC, as with the Mac setup question I guess). On the other hand, we may very well plug in the guitar direct, activate the integrated guitar preamp (and yes, super good quality and more, maybe just a little low level noise, but it depends on taste) and get directly to the output of the Tascam headphone, and there is absolutely no latency, as on a normal amp.

The installation is done it without problems?
A little laborious to install drivers on Windows, but it can go anyway

For how long have you been using it?
Since January 2011 (3 Months) daily as an external sound card. It is an excellent sound card, from the integrated Realtek chipset for my old windows or in relation to the sound card in the MacBook Pro 2011, the quality is far superior, is in deep bass, treble sounds so good, excellent, nothing to say about that!

Did you try many other models before getting this one?
I just had the little home Toneport line 6 (GX). The Toneport is a plastic toy compared to this metal case and macif. While the software in line 6 is very comprehensive, on the hardware level, we feel the difference ... Toneport GX the box must have weighed about 100 grams, the Tascam weighs almost 1kg and above, you can type on it, throw it, the case is indestructible (except the buttons seem a bit "plastic").

What thing do you like most/least about it?
+
- Robust
- Sound card quality
- Input / Output MIDI
- Phantom Power
- Integrated preamp for guitars
- No latency direct mode

)
- Buttons wide gap with the robustness of the box (buttons not resistant)
- Connecting via USB 2 (Firwire, 3 or even USB Thunderbolt were favorites ...)

What is your opinion about the value for the price?
Just unbeatable! Maybe the Mackie ONYX home can compete, but it does not offer so many functions and connections.

Knowing what you know now, would you make the same choice?
I would choose a Tascam again, but with more inputs, a model for a hair above the price can record my entire group together (multi) better. But for the use of the musician who wants to record on Sunday and wants to have a quality sound on his computer, yes, it's really great!
Did you find this review helpful?yesno

Tascam US-122MKII
5
I work with a laptop and an external card was the primary motivation. For my part I use this card to capture sounds from external synths and occasionally from a microphone to record a bass guitar.

On sound side it is great. On the midi side, it is a simple and effective interface, I am glad to have found it to pilot from my synth to my sequencer (Ableton Live 8 on Windows 7 32 B)

my profile is rather electro / studio which forces me to master the effects with maximum precision and I do not really see the benefit of having onboard effects.
For the price, other cards on paper have more options.

Self-powered via USB, it's cool.

control buttons are thin and tight.
I'm using the 2 simultaneous inputs converted to Mono in stereo from Ableton, I mix the sound level at the entrance directly with the card and it's perfect.

The problems of latency do not really affect me for the studio, but I can see that it is low.

Download the driver at the site and it rolls. Manual very clear RAS

My only regret is that I want a second midi input ...

All I can say is that this card is super simple to use. This is the best purchase I made in my config, never disappointed!;
On the price/quality ratio, I have nothing to say.
Did you find this review helpful?yesno

Tascam US-122MKII
5
For a laptop, the problem of Firewire is summarized in one word: From the game in the making!
That is why, I was looking for a USB2 card, and I chose this model.

I use a HP Pavilion dv8 (Intel Core i7, 7 64-bit Windows) Cubase VST 5 and including Omnisphere I use it a lot.

I work a lot with headphones: Sony MDR-7509HD
(By the way I need to write a review on this headphone, it is pretty amazing)

No worries, it's as stable as a marble base.
For latency, I cannot remember anymore, but it is insignificant.

Bah, with Windows 7, if we plug it in, you can go have a coffee. You can come back, and it's ready: it will look for drivers alone as it is great!

I use it for 1 year.
It is true that I have not yet had the opportunity to make tracks with the microphone to the acoustic .... but it's not going away.

I will update my review and tell you.

One thing is certain: the price / quality ratio is quite monstrous!
Did you find this review helpful?yesno
Cookies help us improve performance, enhance user experience and deliver our services. By using our services, you agree to our use of cookies. Find out more.