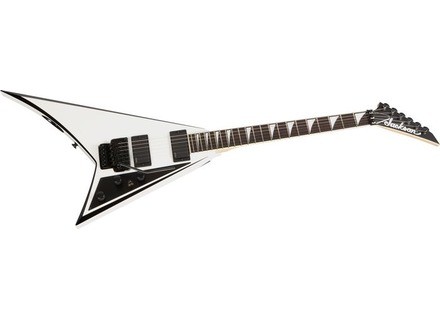 Jackson RR3 Randy Rhoads EMG Limited Edition
5
I bought this guitar from Musician's Friend in Trans. Red for $540, along with the hardshell case for $120.

I love the sound of this guitar. The Duncan Detonators sound so awesome and aggresive. I also love the luxury, such as the Floyd Rose, The great transparent finsih, and Jackson's signature sharkfin inlays.

There is only two things I don't like about this guitar. One is the pick-up selector is crap, I had to get it replaced twice! It just kept going out for some reason. Now I have a better one in there that I paid extra for, so It's awesome now. The ohter thing I don't like is of course the obvious, you can't sit down with it.

Everything in this guitar is freat in quality, except for the pick-up selector switch that seemed to crap out on me twice. Other than that this guitar can ring thunder from the heavens.

I love this guitar, It's a shame that the case for it is the size of a boat, but it's the only case that fits it. If you love playing metal and shredding, this is the guitar for you. Jackson is a great guitar manufacturer.

Jackson RR3 Randy Rhoads EMG Limited Edition
4
$250.00,I got this guitar for a steal. i picked it up from a local music shop

I am a metal guitarist, and this guitar workes great. the neck is comfortable and shaped well. the frets and fret wire is put together great. The pick-ups that come in it arent that bad, but i up graded to EMG-HZs and it sounds encredible.

The only problem that ive had is that the Floyd Rose needs constant up-keep, but whats to be expected. I've had to replace the input and one of the nobs. and i completly redid the wiring. and the case is fucking huge

This is a well built axe. ive had to put strap locks on it because i thrash about when i play, and it has held up through being dropped, thrown, kicked, punched, ran over ect... the wiring is the only bad problem, but fixable.

I love this guitar! and would definitly buy another one if i ran across onther one for that cheap