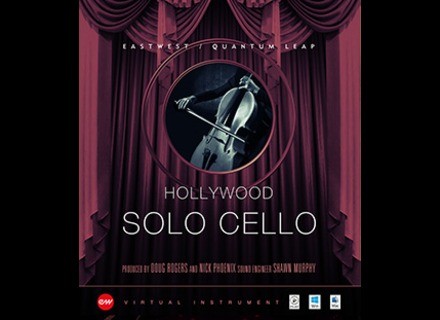 Following the late 2015 release of Hollywood Solo Harp, Hollywood Solo Cello is initially available exclusively through ComposerCloud.
Hollywood Solo Cello is announced as providing detailed and realistic reproduction of the cello. Produced by Doug Rogers and Nick Phoenix, and engineered by Shawn Murphy (who recently recorded John Williams' score for Star Wars: The Force Awakens - no spoiler intended), Hollywood Solo Cello was recorded in Studio 1 at EastWest Studios, where Hollywood Orchestra was recorded, giving the libraries a consistent sound and ambience.
Hollywood Solo Cello features a large number of different instrument files, categorized into long, short, keyswitch, and legato types. It can use articulations to generate long sounds, including sustain instruments with varying levels of vibrato or playing styles like flautando and tremolo; short sounds, including various plucking and bowing techniques, select between various keyswitches outside the instrument's range, or different types of legato instruments that each include multiple sample layers to handle different aspects of legato playing. MIDI Continuous Controllers are used to control loudness, dynamic layers and/or vibrato depths and allow users to shape musical lines the way a live musician would.
Also, until January 21st, 2016, EastWest is hosting a contest on their Facebook page. Contestants shall compose a piece using the instruments Cello, Harp, and Spaces, and the public will vote for the best composition. EastWest will then choose the the top 3 out of the top 20 most popular entries, and the three winners will each be awarded an annual subscription to ComposerCloud. More details available here.
As for the future, the third installment in the solo instrument series, Hollywood Solo Violin, is expected within the next months. While only ComposerCloud subscribers will have access to these new instruments initially, all three Solo instruments will then be available for purchase as a complete set for non-subscribers in 2016.
For more details and/or to start a free trial of ComposerCloud, visit EastWest's official website.