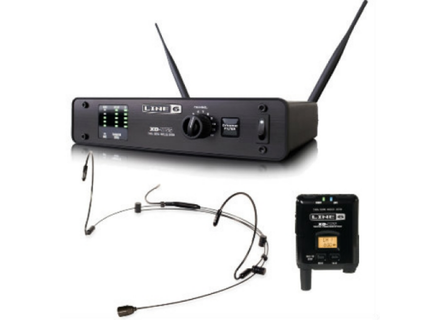 XD-V55HS, Wireless system from Line 6 in the Vocal Wireless series.

Mr.viv's review (This content has been automatically translated from French)" Flee: Micro unusable"

This is my first model headset.

I bought it, as guitarist singer in a band I wanted to release me a mic and be able to move while singing.

First test the balance, solo voice, its not too bad but an unpleasant noise in my ear monitors, I heard the natural reverb of the room board in my microwave. As well as my voice. It felt not good.

Then we did a test with the whole orchestra, bass amp behind me, battery a little further, micro repissait everything that was on the scene it was simply unworkable.

I went to the scene, but the microphone still TV reception as the battery and worse, it also TV reception the sound of the facade, suddenly Larcen uncontrollable.

Stay away if you are totally singer in a band, this microphone is unusable.

The only thing I liked is its lightness, it does not make sense at all when it is worn on the body, but at the same time can not be used so the interest is not huge ..

I had it oriented micro overcharged or a sennheiser shure in the same range as I have read and heard many many systems hf line 6, the system transmisssion is probably not bad but the micro headphone, do not count on ..

And even for simple speech I am very skeptical as my microphone tested alone captais much reverb room that my voice.

Ah yes, because it is impossible to recover the micro or try to steer more towards the mouth. It is completely stiff.

A big zero points for line 6 of this product.