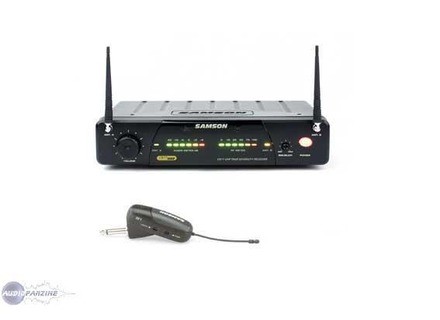 Samson Technologies AirLine 77 Guitar System AF1
This is a Wireless system for Electric Guitar. The jack is designed for a Strat in this model. I tend to have mixed feelings when it comes to wireless guitar systems. I usually feel like they are unnecessary; unless you are rocking out arenas, you aren't going to really need the space that it can provide. It is pretty cool to be able to walk around without worrying about tangling up cables, but that's a luxury that most people can't afford. The one time I splurged and bought one of these, I ended up having some serious problems when I tried to go too far away. I found that if I walked to the other side of the stage, my signal would cut out, leaving either silence or static. Correct me if I am wrong, but isn't the point of this system to be able to walk around freely? This made it even harder to do that than before; at least with a cable you know how far away you can go. It also doesn't sound as clean as a cable does, either, regardless of where you stand. That does not make it an acceptable alternative in my opinion.
I can't say I tried many other models, which may have been a mistake on my part. But I was fed up with a product that seems to thrive more on rock star fantasies of aspiring guitarists than actually providing good tone. I feel as though the novelty of a wireless box was lost on me. The quality of the sound is of more importance. Until Samson comes up with a reasonably priced model that doesn't cut out when you walk away, I'll stick with my old, outdated cables. I wouldn't recommend the Airline 77 Wireless to anybody who can't afford a top of the line wireless system, which is about 98% of guitarists out there.
Did you find this review helpful?yesno
»