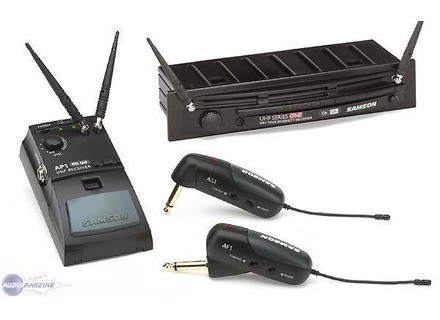 Samson Technologies Airline Systems - Guitar/Bass
4
I bought this pedal when mars music went out of business. I think I paid around 50$ for it. The sound quality was okay and at the time it was probably one of the better deals for the money. I could get out into the crowd or walk around my house while playing and it did not seem to change my tone too much the farther I went. There was however a difference between it and a cable. It seemed to roll off some high end and the bass became a little less tight. Honestly it was not that bad but I am also the type of person to not get too hung up on things that can be fixed with some EQ on my amp. Having the receiver on my pedal board was awesome. I have always been a pedal board user and never wanted to run a 20 foot cable from a rack unit to my board then run through all my pedals before sending another 20 foot cable to my amp. That is just too much cabling to worry about and can add to the noise levels . This little box could be run of my pedal power and I could even mount it under the board to save some space. The main downside to this device was the transmitter. There is nothing to protect the transmitter from the dangers of a metal show. Things can get wild and having this plastic box sticking out of the guitar was always a concern. It got pulled out several times which I guess is better than it breaking but still an annoyance, especially in the middle of a song. The battery life was also less than ideal. I found myself changing the transmitter battery before every show which aside from the cost is also terrible for the environment. After a year or two I went back to a cable and only occasionally miss the freedom of wireless.
Did you find this review helpful?yesno
»

Samson Technologies Airline Systems - Guitar/Bass
5
That's good two years since I played on stage (folk dance) with this system. The mini transmitter is connected to the folk (a Taylor), the receiver on a zomm 504 acoustic and the sound system. The transmitter battery holds 2 balls 4 hours.

The sound is perfect although it is different from his "hip", I found it more acute, but it is perhaps just an impedance history. No breath, a terrible dynamic even in the bass.
Did you find this review helpful?yesno
»

Nicopole's review (This content has been automatically translated from French)

Samson Technologies Airline Systems - Guitar/Bass
4
I use it for several years (2-3 years)
I like his ct practice has plugs into the guitar (a little one turns it's true ... chatertone)
MODELS I try some but I do not want to slam too much money for small
distances, small scnes same medium, it is rather a good product. I use it with a low
Moscato and a Line 6 then ... I trs some noise! More noise on a guitar for making
test on Ibanez RG and a big marchemal (lol)
Good quality price!
I would do this choice! yes ... although it's more for fun I took one ISSUER HF!

metalexophobie's review (This content has been automatically translated from French)

Samson Technologies Airline Systems - Guitar/Bass
5
Welcome to the world of HF, a dream for me because I became Ralite some time ago bought this product to beginners with a little fear, I knew the quality of the cables in g nral, often times less than other properties ... but having finally totally fed up with making Canneva basssite cable of my training and not taking up on scne DCID me so I go ... try to throw myself ... well I can, I say the Discoveries Freedom in effect ended the nodes, the singer who eventually get tangled in the cable ends the cable that pulls on the head up to the chnceler brief happiness! although at first I feared the great pure cot "wave being connected to the wireless web I often surprises, sometimes the radio shit, in other words the cot" my sound is the ride Air from scratches and moa amp "made me a little scared ... but I've had many pleasant surprises, no loss of sound, no loss of speed of execution (a priori) quality of the guard is no mug SKY rock NRJ has not s'emrouille hf with the singer, pfff too well.
In addition compared to the emitters Autes hf guitar is a little thing that plug directly into
between the jack and consumes only a small battery remote control! any slight thing, ... So simple practice for skizo scnique!
the tool not too short of ruinous zicos in search of freedom ....

Only problem is my taste, playing on models GIBSON (jackfruit entry on the cot of scratches), I'm afraid sometimes to the transmitter which although effective, is plastic and a bad shot might
seriously damaging ......
Council asset scratch but I wanted to free themselves from the yoke of 6 meter cable to procurere this little machine a try as experience!

Did you find this review helpful?yesno
»
Read the 5 user reviews on the Samson Technologies Airline Systems - Guitar/Bass »