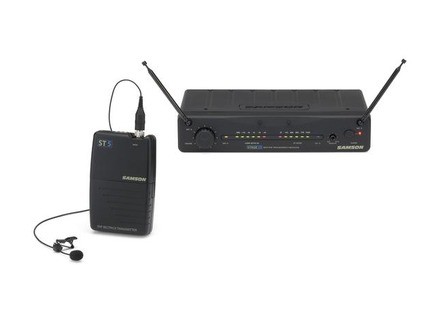 Samson Technologies Stage 55 Lavalier System
4
The Stage 55 Lavalier is a wireless system that comes with a transmitter and receiver. It only cost 120 dollars making it one of the most affordable wireless systems that are out. It is a high quality product for this price and should not be passed up. The sound is very clear and the audio will never break up or drop out on you while you are using it. This unit will keep a strong signal as long as you are not too far away from the receiver and give you a clean interference free sound in indoors and outdoors.
You don’t have to worry about it catching sounds from other signals either, that is one thing that I was really worried about because this unit will automatically lock to the strongest signal that it gets which sometimes can bring interference with other audio signals on that same frequency but I have never had that issue with it.
It comes with a belt pack transmitter that will clip right on your waist. The microphone that comes with it is a LM10 which will give you a clean sound. As long as you do not talk really low then it will pick up your voice clean and you can hook up the receiver to your mixer and have your audio broadcasted out from your speakers and it will sound crisp. The actually microphone that it comes with can be clipped to your shirt, under your jacket or anywhere around the chest area that you want it to be clipped to.
On different voices is where the microphone will cause some issues. If you have a higher pitched voice or a voice that does not have a lot of deeper frequencies like female tones it will sound great. If you have a deeper voice is where the low end frequencies wont sound as crisp. But the LM10 microphone that comes with it is still very good considering that this whole system is so cheap.

Samson Technologies Stage 55 Lavalier System
5
I have since yesterday !!!!!

the +: Cheap (80), right door, and then wirelessly what!
the -: strong sound distortion ... for a saturated ca gene, but if you want to play clean or it is better to take off the old jack.

The transmission has never jump and ca nikel going throughout my house, ie 15 to good with walls and a floor (I have not had a chance to try it out ...). You just take the time to rgler volumes of transmission and so good.
The only major default and thus loss of the famous sound quality manifested by a distortion (or noise) quite annoying when it comes to playing something calm.
I prcise anyway, It does take care ^ ^ a stack (think regargeable).

80 For when you look at the prices of other products for wireless, in my opinion an excellent qualitprix!
Did you find this review helpful?yesno
»