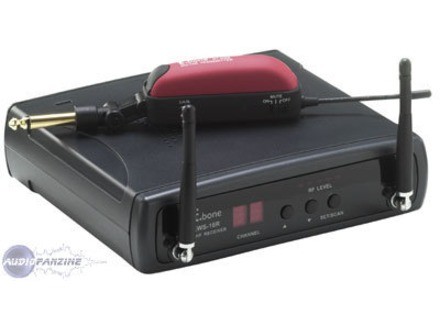 stratvinc's review (This content has been automatically translated from French)

The T.bone EWS 16GT
3
I use it now for 6 months I have long wanted a wireless system for my guitar I t seduced by its size and price concept
I very well control at T .. and less than a week after I reois my package and I plug the mic fright behaves as a compressor limireur addition to the we put p che not panic after different rglage gain we find the game feeling
But it is true that the sound is not restitution with faithfulness you have to play with qualisation and offset the loss of gain on the amp
but it's nice not to get caught in cables .Regarding autonomy utuilisant good alkaline batteries after 16 hours of use .I dtourn the cost of problem by buying a set of batteries and I take 10 hours battery .Correct
Santa Claus comes to pass with American Deluxe Strat I returned to the wired to keep all the quality of the sound of my Fender.
so I keep my little HF for electro acoustic and my other grats.
price quality ratio is nothing wrong in what you pay for and even more. Recommended for a beginner wanting tater HF without breaking the bank.
I would do this choice? honestly I do not think too much loss of earnings and easily correctable dnaturage of her if we have not the stuff behind
Did you find this review helpful?yesno
»

lechaps's review (This content has been automatically translated from French)

The T.bone EWS 16GT
Hello everyone,
I just received my 16 GT EWS hf guitar, quick, Connecting it!!
ordered from the famous store that every musician knows (Thomann) arrived in a great package with a small package to bring its transmitter with its red cover which fits the battery, the little key regulating and a small scratch in order to mount it on a second guitar.
the first contact is quite nice for the price, it's really a great little machine, Connecting the external power supply and receiver. we perceive the display of the receiving channel 01 from the factory. we place a AAA battery in the ISSUER and go ...
after various adjustments (gain on the transmitter, the verification transmition channel, squelch) it works really well, gain, no dropouts and even a great distance.
weak point of the device, no output setting for the receiver, no French documentation in the package and above all the sound is not a faithful rendition, plugged my Start HSS, the gloss disappeared.
the sound is fat, high medium and are attenuated acute.
I will definitely return and try another model by Tbone

adriensonata's review (This content has been automatically translated from French)

The T.bone EWS 16GT
1
Hello, I bought this last year and hf I returned this week!
In addition to being limited cardboard that is to say everything is plastic, even the receiver, its autonomy is zero at zero!
I play in a band, I plugged in to a concert and I changed the battery 2 times during my set, outcome, damn concert!
So I would not recommend against a person by just after I bought a 72 per seinheser fp 150euros and yes there's stuff

Other The T.bone wireless systems