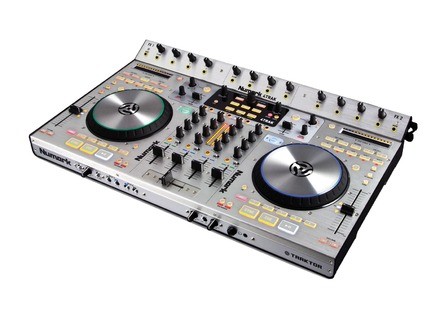 Numark 4trak
4
The Numark 4Trak can be purchased online now for an amazing price, I am actually a little upset that when I purchased it I had to pay the regular release price and now it is so low. This DJ controller will allow you to take complete control over your performance or DJ set easily with the touch sensitive platters. You can use these platters to brake and scratch like you would on a real set of vinyl platters. When you purchase the Numark 4Trak it will come with a copy of Traktor software. This to me is one of the best DJ software programs that are on the market because of how easy it is to use.
Setting up the 4Trak is very simple and getting it synced with Traktor could not be easier. It will only take a few moments to get everything ready to go and then you will be scratching in no time. The actual hardware 4Trak is a 4 channel mixer that can be used as a standalone mixer if you choose. It does no have on board built in effects though but that is where Traktor comes in at. The audio interface is a 4 channel at 24 bit/44.1 kHz. There are 2 tempo and pitch faders with 4 volume faders.
This 4Trak controller is very well made, all of the materials seem to be metal like even though it only weighs about as much as a thick text book. It is still very portable and ready to go wherever you are.
This controller does not have MIDI connections though, I think it would have been a plus if there was MIDI incorporated into it. The 2 platters are touch sensitive and they are also illuminated, providing 3600 ticks of resolution per rotation. With this controller you will get everything you need to start mixing. I do recommend getting a gig bag to put the controller in so you can keep from dropping it or dinging it up while taking it with you.

sirm.ile.7's review (This content has been automatically translated from French)" Numark 4 Trak. Well ... but not Top!"

Numark 4trak
I bought the 4track almost at its output, the controllers were comparable at the time the Pioneer S1 and T1 (The Sx released six months later), S4 ...
I mixed with it for a little less than one year, I've used both club at home and even on the radio. Before him I have owned and used (from the beginning) Stanton Final Scratch, Serato Scratch Live, Vestax VCI 300, and finally the 4 track (Today I play DDJ-SX

What I liked in the first 4track is its look, like "war machine", with lots of functions across the bar inclined effects, the fact that it is brushed aluminum, it's really and it feels sturdy. The sensitivity of Jogs is really perfect and they are very reactive, it can scratch, make passes passes without problems, etc.. it is a good quality controller.

One big downside is that it has no VU meters per, which frankly is a major fault on the part of Numark because for the price and the target of this product, it is sorely lacking. There are many custom presets to transform the LED strip search in the meters but they will be vertical and so far more than 20 cm from each other ... impractical.

Another big negative is the very setting of the pitch. When you want to change the pitch of the music of a Deck, we must "engage the pitch." I have long believed that the pitch was not working so the logic is strange and inappropriate! To go from 128 (imagine ..) to 130 bpm, for example, must first of all a big round trip with the pitch wheel for that they become active. If you test with a newly loaded track in the deck, to go from 128 to 129 bpm, nothing happens ... he always do that damn round trip. We can therefore NOT send a track on the fly and adjust the pitch while it plays. I have done several times in the club and it is very unpleasant, suddenly to avoid this problem, one can not easily escape the Syncro, which is unfortunate.

I could make a long list of pros and cons about this controller, but the last two "against" made me sell it fast enough. And what about the lack of respect shown towards customers who have paid this Numark controller about 975 € and have seen prices tumble to 550 € retail price (about 6 months after its launch) and as I have lost at least 400 € for resale!

In general, the Numark products are mid-range, I owned a 5000 fx, another small mixing desk, and 4TRAK. I think these are my last purchases home.

Numark, there is always something that disappoints and it does not live very long (2 or 3 years max) while for Technics or Pioneer, it's something else ... but it does not cost the same price.

I recommend her eyes closed, the Pioneer DDJ SX, you will not be disappointed, I'm not!

francois74330's review (This content has been automatically translated from French)" Numark has impressed me ... Congratulations to them"

It is partly rack ...
For controlling the above.

I've used a Numark controller (Mixtrack Pro), but now I admit that there is change.

View all 5 videos of Numark 4trak »