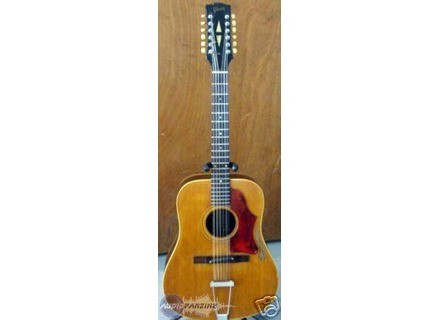 Gibson B45-12
3
This is a quality twelve-string guitar, made by Gibson, an all around legendary manufacturer. This is acoustic, and has no electronic capabilities. There are 20 frets but only 15 are easily accessible. There is a rosewood fingerboard, a maple neck and a sunburst body. The bridge is a trapeze tailpiece.

This is twelve-string guitar land, and playability is always going to be an issue. I think that this guitar especially suffers from an extreme difficulty in playing. Also, intonation and dead frets are a common occurrence. I think that is the reason I got this guitar so relatively cheap (considering it's at least from the 70s). The twelve strings put too much pressure on the headstock and cause it to lift. Also, the neck is really wide and difficult to really play all the way. Doing work on these is almost necessary to ensure lifelong playability.

I really am disappointed that it is so hard to play this thing, because it sounds amazing. The tones are really rich and bright and cover the entire depth of the sonic spectrum. There is no annoying midrange buzz, and none of the tones are harsh, but also not too dull either. I can't believe how good this thing sounds for how cheap I got it, until I consider the already mentioned issues of playability and intonation. This is great for both folk and rock/pop tunes. I wouldn't be able to imagine twelve-strings for much else, so this is great.

I really liked how this thing sounded, but it's so hard to play that it's a problem. It's good that it's a twelve-string and that as such, it won't be used often (unless you are extremely partial to them). But it's still difficult to play and can actually give a seasoned player some tendonitis, which is unfortunate. Buy at your own risk.
Did you find this review helpful?yesno
»