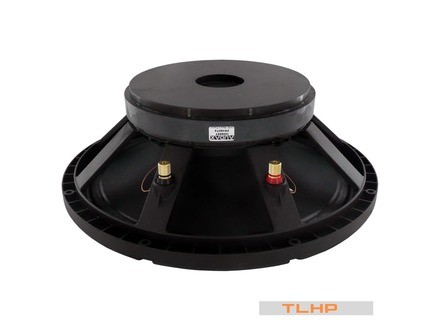 Me yoda's review (This content has been automatically translated from French)" HP exceptional!"

I used two pairs:
One in four pregnant studio Monitor 132L care about BR and 3 vents 100mmm, given to 50Hz.
The T4 is coupled with homogues Audax PR 170 XO and tweeter Fostex FT 66H, separate filtering racing ...
The other pair has been operating since ... 1993!
T4 Set in boxes designed by Audax, under so-called "compact speaker sound very high yield" configuration.
I confirm! This box of around 50kg with CTBH chipboard panels of 22mm thickness is downright dangerous for any occasion.
T4 is then associated with PR 170 MW, THE classic par excellence of the medium in high yield approaching 100dB/1W/1m, exceptional for a "vulgar HP paper cone."
This product is also for at least 40 years non-stop a classic ...

In "high" tweeter Audax PR 130 Ti, which in this configuration works quite well, even if not the finesse of a Fostex or Tad / JBL and other Beyma in the genre .. .
But against very reliable.

In short, the PR 380 T4 is for me one of the best Woofer in multiple use, and even remonstrated with many other HP known, not least ...
For me it still upsets many certainties / hierarchies established its transient power handling capacity and its direct competitors including VS.

Like any self-respecting HP, it must be loaded and the need to correct the curve a bit.

It was not the same "default" as its venerable ancestor PR 38 S100 VST, then PR 380 its closest "cousin" M2, which should temper the curve around 600Hz, as strong staining and recovery curve.
A cut is then rather steep so highly recommended from 500Hz.
The T4 is different because support high temperature Kapton and exponential profile and membranne smooth classic pulp cellulose.
This is a bass / midrange and can be used in 2-way only.
His side: This is dynamite, it is neutral moreover, super fast, transient / attacks are phenomenal.
Very busy as it should be, serious own hyper, tense, fast, feel ease with insolent ease.
I understand that at one time, and perhaps even now, it is used in the manufacturer Nexxo.
Before it was built in APG, a former manufacturer of compact speakers sound excellent quality too.
His ancestors are found in the JRC, huge columns of 4 channels birch finland, 7 HP Audax (!), 2 X 38cm, a 33cm X 17cm 2 mids and 2 tweeters! All filtered active ...
A "massacre" in the genus ...
To return to T4, it's safe, and most importantly, a dynamic crazy.
I recommend it without hesitation ...

Use for a pair since 1993 and has beacoup flight hours ...
Use concerts, DJs and so on.

As a musician myself and having heard a lot of other systems, including JBL, Altec Lansing, Tad, Yamaha etc ... This HP to remonstrate audax in quite vs. its direct competition.

I heard years ago qq Similarly, some clubs have swapped their JBL against Audax release T4 ... That is to say its reputation ...
But it has been very long in coming because prejudice fools ...

Her favorite features are its performance and speed demon, its rather "clear" for such a boomer, power handling and reliability.

His only "fault" like his cousins ​​and ancestors, fixation can be perfectible the core of the gap can be off by a violent shock side.
A simple idea would be to add peaks or small cylindrical imbriquants points in the plate background field.
If in addition they could be downright welded, it would be nirvana and never worries.

But the problem I have been once on a very old PR 38 S100 recovery, which upon manipulation 'by leaving the box, dropped a few inches into the housing and the magnet bumped. That's it. The core is unsealed and farewell HP ...

For its value for money, always the same problem here, a rather unfavorable cost of production in the field of PA Pro, but given its many qualities, its price / quality ratio is well worth the effort.