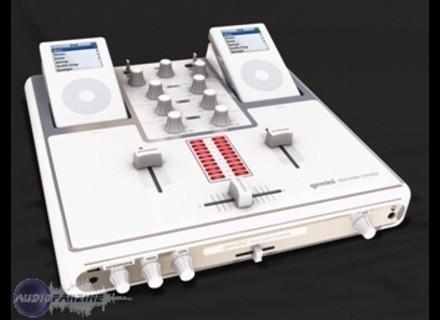 Gemini DJ iTrax
3
You get what you pay for with Gemini's two channel iTrax Mixer Console. For about $100, this mixer comes equipped with two gain knobs, each with a three-band EQ, and is able to dock up to two iPods. There are also two auxiliary RCA inputs, each able to be switched from Phono to Line level. With two analog faders and a crossfade, now anyone can DJ with iPods. This mixer will not rack mount, however.

Although there is a Microphone input with a gain and EQ, it is a 1/4&quot; input and the preamp sounds pretty terrible. There is no talkover button, so it is a hassle to use any sort of microphone with this mixer. The headphone jack is 1/4&quot; as well, but the cue is a crossfader, so it is difficult to get separate levels on each channel. This is a beginner's mixer, but for $100 it can hold its own.

A nice feature is the ability to connect to a computer via USB. Each iPod can by synced while it is docked in the mixer. However, only one iPod at a time can be attached. This mixer also charges an iPod while it is docked, so keeping your iPod on the dock when it is not in use will not only charge it, but you can attach the mixer itself to a computer for syncing, and your iPod cable becomes obsolete.

The main outputs are RCA, which is a huge drawback. However, these is an RCA video output, so this mixer supports playing video from iPods into a TV or other RCA-ready device.

Since the main outputs are RCA, I find myself running this mixer into the Tape input of a larger mixer, good for between-band DJing during a live performance. All the auxiliary inputs are also RCA, so lots of converters are needed. However, if you want to play two iPods with no silence between songs, this is a great problem solver.

Each channel's gain and EQ can be individually adjusted, as well as a master volume. The faders are pretty flimsy, and it takes some precaution when adjusting them. The docks are made for the iPod classic models, but the iTrax comes with adaptable docks for the iPod mini.

For a $100 analog mixer, the sound is not terrible. It's made for lossy mp3 playing, not serious professional DJs. The high end is pretty bad, and the gains on each channel get distorted at maximum volume. There is no noticeable hissing, compared to playing a laptop or iPod directly into a sound system.

I've used this console for about a year at birthday parties and bars, when professional DJs are not really required. It is easy to hook up, especially if there is a house system in place, and it sounds much better than a gap between songs. Since I am a live sound engineer, this works well between bands. However, I wouldn't keep this if I were going to be a professional.

Very light and easy to hook up, if you've got the correct converters. Very compatible with iPods, which makes it convenient if sound is not a big issue. Phono and line aux inputs allow for laptops and turntables to be attached with ease. Very basic, nothing glamorous or unnecessary. For the price, a great find.

Poor sound quality for a professional atmosphere. RCA outputs are very difficult to work with in a professional environment. No talkover microphone button, and difficulty with microphone settings make it unappealing to even use a mic.
Did you find this review helpful?yesno
»

Other names: itrax, i trax