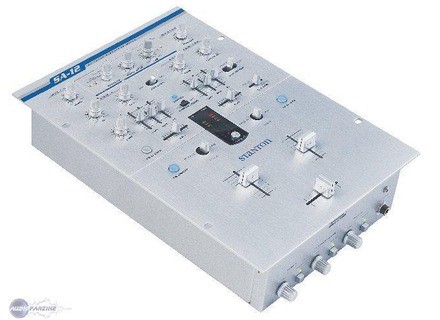 ninjafada's review (This content has been automatically translated from French)

C of happiness!
g really progressed with this little jewelry
it is used extensively for more than two six months and cross faders are nickel!
can not be said for our old tables!
ca qualiseur the linear life-changing and the filter lp-hp I can not do without,

C trs good in sound,
small snag effects gnre a small parasite trs slight audible sound if there're no music
but it did not drang for a mix. (c quibble I admit)

I highly recommend it!
good sound, effects, robust and practical rather pretty.
I got it new less than 300 euros to states, but even a 500 euros c trs a good report quality price.
if a ct again? without hsitation!
Did you find this review helpful?yesno
»

djcrazyhands's review (This content has been automatically translated from French)

Of course! There's even two holes on each cot was set for a fly WOW technology, in fact, a battle mixer so base size for a battle mixer but still face a relatively large Numark Pro SM 1, so we can put in every fly box you want!

Yeah and the most is that this Eq is linear and non-rotating, so plan for feedback (turntablist s'auront what I mean) and the quick adjustment is better and more accurate for my taste.

Yes there is an effect module home another "silent" available, the table n'tant most markets, the second module may be found.
Otherwise the box presents intgre effects: flanger, delay, pitch shifter with a certain quality.

- The configuration gnrale Is it easy?

It's a good battle mixer so nothing too complicated even for the effect is super intuitive settings fader and crossfader too.
- The usual functions are they easily accessible?

She does design by dj craze, (3 times world champion dj) so it is designed primarily for scratcher you see it. But this mix is ​​very very simple to use.

Small black dot is only in English but hey it's not shakespeare So here it is just as important in how we clean or change the cross fader and fader.

- The console is transparent?

Nan is gray with blue stripes (humor shit !!!), no sound problems at the moment, the sounds are reconstitus

Oh yes! we put the kids all EQ and for once it was over his coming out was real good kills, relatively accurate and covers the three frequencies boats djing.

A week may be just my opinion by the change. I'd do you part.

Assets:
The crossfader and faders, the optical transform "indestructible" and made for the scratch, the box effect intgre, ergonomics, finish gnral, the price (well for me at all cases)

Cons: uh transform the too soft but that can be blocked to avoid errors.
gnral good design but it was not the most important

- Have you tried many other models before acqurir?
I possd a numark numark dxm pro sm1 June 1st. I also test a stanton smx 501. Tascam xs 3, numark ppd01.
My dream is a good rane ttm56 like any scratcher but His 12 is a superb product quality and a very pronounced

For my part exellentissime, I had the chance of hitting a new 12's in Germany there is little real cheap.

Er for the price at which I had so without hesitation!

If you equipped with the latest Pro X Fade crossfader of the mixer eclecticbreaks become even better than it is dja, and you'll be the envy of every tourist holding of such mixer, vestax pmc 07 and consort. ..

If you have the budget do not hesitate to put this accessory, it will make a few changes in the table to accommodate it.

dj otaké's review (This content has been automatically translated from French)

So, yes and yes ... re a table battle trs easy to use.
even no need to manual (all I had not fawn)

Currently no problem, no breath but I still pushed a block vraimment

EQ very practical, much more than a turning knobs!
the cuts are effective trs.

For now it's been two weeks, but I spend my nights on it.

The +: the cross which cut trs well, the faders, effects and the design of the can (I find beautiful ... trs
le-: the optical switch a little too soft but there is nothing you need to vrouiller or nothing (well not yet)

I tried diffrent numark and gemini but it has nothing to see, no one plays in the same CATEGORY ...

qualitprix report is unbeatable, I bought used with a power 250euro suplmentaire effects.

then I would do without this choice problem ... and thank you stanton dj craze
I would put it a good 9.5 MRIT