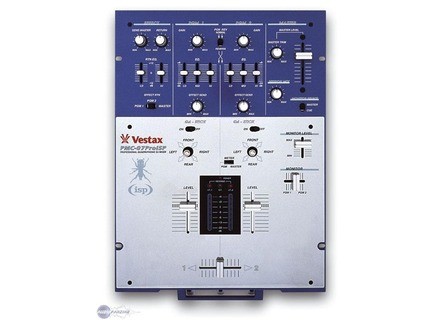 All user reviews for the Vestax PMC-07 Pro ISP

Vestax PMC-07 Pro ISP
5
A table rack, two-way jack connector (RCA shame the ais is better you have to buy the right cables) console not numrique

Its been a year now I have and it is great especially for the sessions! dja possdant a pmc pr 7 and my ERRF TTM56 is the top one in session over a box with good rhythms (thanks to jack plug more adapted a must in short, a good mixer! with an even stronger cross the TTM56 (yes I swear!) and my 7 pmc pro tou court but the big problem is the budget (yes its the APRS PORTFOLIO puts you in the closet for a year!) but I do not regret it at all!
Did you find this review helpful?yesno

Dj Fotik's review (This content has been automatically translated from French)

Vestax PMC-07 Pro ISP
4
It's a mixer 2 way, 3 with the "session" which is in fact nothing more than a line between ... It is used to connect another table mix for several DJ battles! (Such competitions by team - it's the Invisible Skratch Piklz table).
The connection is done by RCA for the "phono" jack and the rest just ... The qualisuer is nice, it cuts though it is small enough but still good even when size to the controller even with big fingers!
The effects section is well thought, no worries at this level of either, simple and convenient interface ...
The cross is awfully damn good, such as faders, slipping really very good! it's tough!
A small default: both tracks are "phono" only! and even when she has a little breath!

The buttons are well placed, with no one n'accroche Precipitation Occurred, all is well dispositionn!
The most useful functions are a gate finger, the less useful plius moves away, she really does think by "pros"!

The table reproduces a good sound, egualiseur done a good job, it only what is asked, it cuts really well and frquences cuts are good.
Even when it introduces a lot of breath compared to other consoles that I test and it's annoying! Otherwise the rest is excellent!

I use it for a year soon, the faders and the cross have not moved yet they suffer! I have rarely seen a table with knobs as enjoyable in the fingers ... rel a little pleasure to own ... I also one of UMX5 Gmini and PMC06PRO VESTAX of the ISP and I prfere by far! To line level devices on the ISP just buy converters, it's cheap and that's okay! Even if it blows a little, mix with the pleasure of the table is more important then it's worth it! Frankly, it's a very good restaurant!
Did you find this review helpful?yesno
Cookies help us improve performance, enhance user experience and deliver our services. By using our services, you agree to our use of cookies. Find out more.