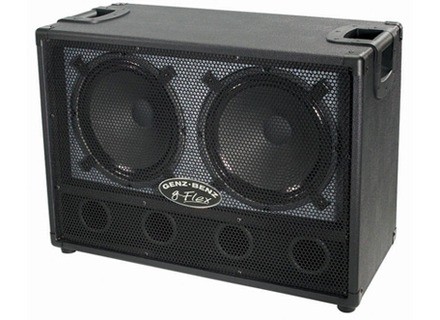 Genz-Benz GB 212G-Flex
5
This is a great cab. Let me just say I have no interest in Lynch's tone, I was and never have been a big fan of his tone or his music. Though I respect that he can play quite well. The Gflex is endorsed by him but I didn't buy it because of him. I bought it because it was advertised to be as loud and full sounding as a 412. I have to say, it's pretty darn close if not, pretty much there. I wish I had more time to compare it with a 412 but at the time I only owned this cab and a Jazz Chorus combo. Interestingly enough, I've heard Lynch doesn't even use these cabs live and if he did it was for clean. I'm not surprised by this, most players who endorse stuff don't even use the gear they endorse.

Anyway, back to the cab. Solidly built, a bit on the heavy side, and kinda bulky but that's what you get for such a huge sound. It projects quite well and does sound very very good at far distances. The 4 bass ports is really cool and is 'supposed' to help the bass travel. I haven't gigged in quite some time that needed something with such power, rated at 150 watts and is HUGE for a 2x12. Though if I did have to, I would definitely pick one of these up again. It does need wheels for easier transport though. And a lot of players prefer no wheels cause of the bass response, but that is faux bass response and is only felt within 5 feet of the amp, the mic doesn't pick it up nor does the audience from far distance so that's something players are usually deceived by.

I had the Gflex when I was running a dual amp setup. Roland jazz chorus combo for cleans with a laney GH100L for dirt through the GFlex and I gotta say I pretty damn happy. Minus the rig-hauling to gigs, everything sounded pretty sweet. I sort of wish I kept everything that I had but bills bills bills. Anyhow, great cab, great build, great sound. I can't really tell you what it sounds like, it's not a modern rectifier cab sound nor is it a vintage marshall it's more like... its something of it's own and it sounds great. Like a higher resolution vintage marshall sound? Does that make any sense?

It will cause the appearance first, since that's what we see first.
He has the face for sure, but from there to find beautiful should not be abused.
The mine is the old range, the first version of GFlex 212: finish with black carpet so sound of 90's, black grille and rectangular logo "USA Genz Benz Enclosures." Big black plastic corners, side handles and 4 bass-reflex vent tube.

It is a 2x12 "quite cumbersome. Imagine what it might not be best known when it was in combos or even 1x12 2x12: This cab is big. But it is undeniable that it sends the puree.

Mono or stereo connections, enclosure and bass reflex help to make it flexible.
Soft but punchy. The HP is not in the usual Mr V30 All-the-world, it's special in GB. Genz-Benz brand is best known among bass players (at least those with a bit of culture Trace / Ampeg / Hartke) so it's no surprise that we are faced with a machine with big sound a definition of all frequencies up to expectations.

Those who wonder what is capable of producing a cab designed for G. Lynch will be surprised to learn that this is not an enclosure too typical 80's metal. We can do just as one can play jazz with a BC Rich, the verdict is final, not too done. Here is the same but the other way, it is nickel for large saturations, but also excellent to highlight the roundness of a clear sound.

Used with a modest but effective head Peavey Supreme XL 212 GFlex the oats secos.
Very low current (2x12 inch mounted on non-parallel planes and bass reflex, okay?) And an attack cleanly. Probably a good head lamps, it is already very good with this small head transos. No need to cut the mids, this enclosure provides the presence in the bass and treble sound that required the big job, with good treble definition. What calmly deal with the distos couillues of metal (from aug heavy nü). It's funny, without touching the settings of the head (just 12) is the sound of Pantera CFH way! it's causing you the MIDI?

Big, heavy, powerful ... How manly! But precise.
Without being a cliché like "there I'll make you busting my tympanic riff that kills", the sound emanating from it is diabolical. Also tested with the POD XT (pack VTM characters and sounds) the verdict is: immediately veer modeling of cabs if you are using this forum! It is all too present to support the rivalry with the chemical. Against it by giving a very significant realism to models.

I had the opportunity to compare in the same room and with the same stuff to other 2x12.
Among the selected pieces are beautiful: ENGL 212V (V30), Mesa 212 (V30), Framus 212 (V30), Marshall 212 "I know what" (GB). The assessment is broadly positive for GFlex, only ENGL could go the distance with the same mind and same settings (heads and Mesa Stiletto ENGL Special Edition) issue but bass response "wild", the UK is far ahead with less acute drastic as the ENGL.

Result: nice enclosure that can cover almost all registers (except to play jazz unless the EQ) goes very well with the heads transo / lamps and tolerate fairly well the models except for cabs modeled. The serious stuff but too rare. I dream of a second GFlex 212 to switch to true stereo. Yum.