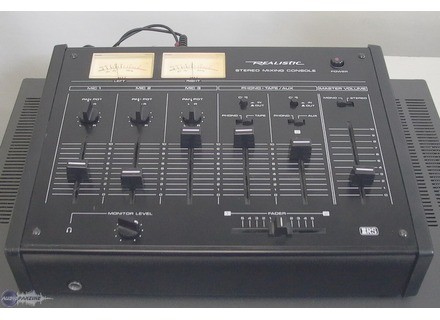 
3 user reviews
Find it in the classifieds starting at $50 Avg used price: $50

Realistic 32-1200B
3
The Realistic 32-1200B has a couple characteristics for its use. It's a rackable mixer with connections of RCA and Jack connections. It doesn't have XLR microphone connection, just a jack connection for microphones which isn't very convinient. It is an analog DJ Mixer for turntables that isn't so great. It has an amount of 3 mic channels, 2 channes for the turntablesa crossfader and a master volume. In the back it has 1 AUX input and one Tape Input as well as a Main Output, a Tape Output and Phono 1 and 2 Inputs. It has no effects section on it, not EQ or mixing... just faders.

It's easy to use. All you need to do is connect the turntables to the Phono Inputs and wire the ground and your set. Then all you have is faders and volume channels and microphone channels. It was easy to put together and the manual was easy to understand.

The sound quality isn't good... It makes a big hiss and has a lot of mass sound to it. When you play a turntable with it, the quality of the sound isn't good as it's hard to hear because of all the hissing and mass. It has no EQ, so there is no way to control it.

I like that it was easy to use and it was good to start off my DJing, but if you're more professional, there are way better options to choose from. I didn't like the characteristics and tools of this mixer nor the sound quality which was poor. I also desliked the smoothness of the faders. It was stiff and hard to move. The price was decent, pretty cheap, wasn't a big of a deal. The sound quality as I said, was poor and it created a lot of mass and hiss which was hard to egt rid of. I hadn't tried any models before this one, since i started off with this mixer. This mixer isn't very good and you are better off looking for other DJ mixers.
Did you find this review helpful?yesno
»

Bout'chou's review (This content has been automatically translated from French)" I like it but I do not know why."

Realistic 32-1200B
3
It is a small console for home use DJ who directed seven entries. 3 microphone inputs and 4 stereo inputs where you can connect devices such as a CD deck or a turntable, you can also connect two of each.
there is a very simple system of pre-listening with the inability to control the microphone inputs: '(
On microphone inputs just the only thing we can do is pan the microphone to the left or right. This is very basic!

It's very simple and even a bit too much. Because suddenly not be able to preview the mic inputs it is a shame! There's no EQ or Aux, no pan on stereo inputs. For these inputs we can just select either vinyl mode or online mode, and that for the two inputs.
There is no such function would have phantom power for powering microphones would need to operate. In addition to the connections of microphones must be done through jacks, and this time I even know if it is possible to have phantom power on such outlets.
The output levels are visualized on two windows needles, then bah it's not super accurate, but I love watching the needles dance to the music. It's something mesmerizing thing!

This is not folichon for microphone inputs, it saturates very quickly! And there is even a little more breath. Inputs for vinyl I do not know as I've never had a turntable. on the other hand for input lines is not that bad. It did not seem to alter the sound from a CD player. At the same time I am very far from being an expert.

Bon bah it is obvious that this small console is not at all suitable for use for musician, even if at times it can troubleshoot. I advise against even a home studio use with keyboards, because it is not really his thing.
I bought in a flea market for a little over 10 Euros there almost 10 years to be able to plug in a bass synth and my little microphone to try to sing. Sure I had clearly not a good choice, but I was barely 14 years old and I was careless

But she quoted this nice console, as to be able to connect at least one turntable to power why not enjoy old records in his home studio. Or expand the ability to connect two additional stereo devices without too much loss of quality.

Jack and RCA connectors for microphone

No equalizer
No effect

No breath, at least for now.

I use it for a month

This is the good aspect to it oldschool

very good I got it new at the time it was worth 800 francs still be 120 euros, which was not given to a table with no effects and no equalizer

Yes but if I find good prices pioneer
Did you find this review helpful?yesno
»