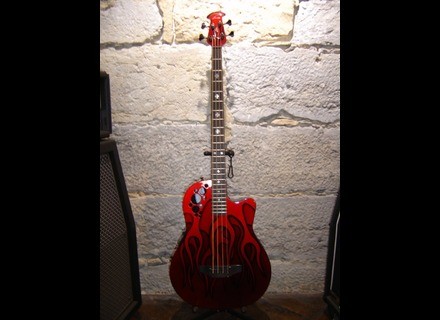 ttoine's review (This content has been automatically translated from French)

Ovation Elite Nikki Sixx Signature Bass
5
Made in the USA, run "standard" in terms of number of frets.

4 piezo sensors, an electronic actique including a chromatic tuner with digital display, equalizer, and the ability to feed the pre-amp via a phantom power supply.

The neck is maple, not big, just to be able to mount the strings in all tranquility deep draft, the body is composite, it is based on the series of Ovation Adamas.

The truss rod access is provided via a trap-door that you open the back of the box.

No complaints on that side, the design borrows from great art.

Connected, no need to remind you that you play on Ovation, it speaks for itself.

Acoustic, finger or a plectrum (a bit more attack), it sounds. So much so that studio, we preferred to put a microphone in front than to keep taking over the pre-amp.

The gameplay is flawless when seated, however, standing, the neck is heavier than the body, it is unbalanced. And it's a bit annoying. But since I do not use that showcase acoustic or studio, it's not overly annoying.

Regarding the setting of the handle, it must be done according to the change of season, especially if you climb the ropes. Access from behind a little pain in the ass. you can adjust the height of the strings, but it is better to go to a luthier, because you have to disassemble the bridge.

The gameplay resembles a bit of a rickenbacker or accurate, given the size of the handle.

I will put 9 because of the imbalance, although it is not meant to play up. But it is certainly one of the most enjoyable intruments on which I played with Pedullá.

Nothing to say. I climb with ropes of Adario to net flat. This is good. Dynamic and heat, I feels to climb ropes GHS "tape Wounded" (filet wrapped in black nylon flat) to try, especially the red and black look of these strings would be better with the bass of the Adario. But hey, I tickle

As I said above, in the studio, skeptical because of some plastic side of the box, they do not return to their ears.

I also have a Takamine EG512C electro-acoustic, nothing to voi, when you start playing, you hear once that you play an intrument premium.

You can easily play inside with two guitarists and a singer, if playing with a pick. And it's quite rare for an electro-acoustic bass, that's why I said. I precise that I also tried a lot before that and there is no photo.

In a word: huge. and therefore the note goes with it.

Hmm ... the look, either we like or not like it. Personally, I saw, I wanted to try it, and I flashed it because of her. I was also fortunate to have the means to buy it that day, because there are only for France.

Since then she has become my favorite intrument work at home, or playing with friends at home, since we know it well without the plug.

In short, this is by far the most beautiful I intrument. And even if the price excessive for a "simple" electro-acoustic bass, both in terms of violin making and in terms of electronics, it's beautiful, it's solid, it sounds, and it's playable.

No doubt, even if it is almost impossible because of the scarcity and price, I would do this purchase again.
Did you find this review helpful?yesno
Cookies help us improve performance, enhance user experience and deliver our services. By using our services, you agree to our use of cookies. Find out more.