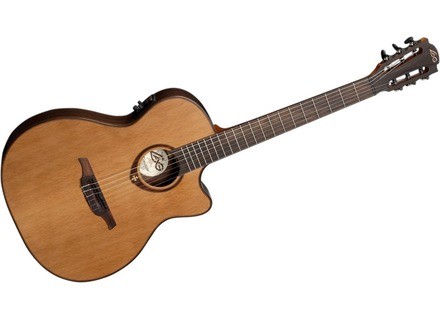 All user reviews for the Lâg Tramontane TN300A14SCE

Lâg Tramontane TN300A14SCE
5
Made in China, but they will not to the point of putting it on the label of identity of the scratches ... just a little sticker on the back of the head removed as soon as the guitar in hand!
The mahogany neck (very slightly flamed on mine) is quite late for a rocker to play it, however I have small hands and agreements to take a few inches but still doable!
21 fret rosewood fingerboard pretty well finished in all but "hangs" a bit treble side ... there are limits to everything!
studio preamp lag more with not a single information easily accessible when the preset .. but hey it works very well with the correction LF / HF and the little tuner that goes!
red cedar and rosewood back and sides of my liver very fine jig!
varnish Saitn very nice with only 2 / 3 small "blisters" nothing too serious for the price
Apart Bindig has suffered a bit with the installation at the cutaway and the imperfection of the above-named varnish must recognize that the general finishes are good ... and in no way inferior to more expensive guitars!

The mahogany neck (very slightly flamed on mine) is quite late for a rocker to play it, however I have small hands and agreements to take a few inches but still doable!
form and the fact that it is a slimbody make the comfort is to go!
The prampli can change the sound in a round knob and balance LF / HF does the rest! The possibility of the preamp is bypassed will appreciate to answer all axigences!
against by original action was so high that it was all playable on the top limit of the handle, after a few minutes of filing the bridge saddle that does it all the better now and pick rodrigo and fiery solos are no longer a problem ... (at least not in terms of the instrument)!
So here who lost points on this point because at this point it's still not great (I think the beginner who receives and who have no other choice but to pay € 50 more for setting ...)

Ben actually I bought mainly because I'm allergic to the metal sounds of the strings sound ... a part to play in the open with a slide ...
So I used at night when not a sound did haunt the streets and we must recognize that the sound is more balanced than j'aurrais imagined, are the bass for my taste and the sound is beautiful!
round is powerful enough to play a quiet but without too much either ... cool Barouf what!

I've had a few months and I say I ODIS already well-worn strings ... it's a simple guitar, the finish was correct and that once set gives great satisfaction ... I rediscovered the game in acoustics and I look at classic pieces that do well but sore fingers found a sound that serves them well more than the gear spins Electrified!
I would not take it to repeat until it is very intolerant of distortion!
The chosen was difficult because in my wilderness difficult to try something other than paddling with ropes ... so yes I referrer carefree!
value for money is very interesting!