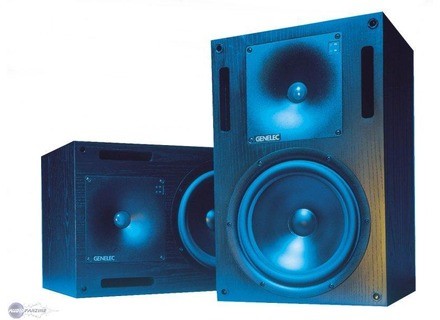 Genelec 1032A
4
The Genelec 1032A's are very high end studio monitors, best served as near field monitors. They are sold as single monitors, and are very expensive. The monitors feature a two way active monitoring system, so no power amplifier is necessary. They've got 10" woofers and a 1" tweeter and aren't huge but aren't small. The frequency response is 36 Hz to 23 kHz.

The Genelec 1032A's definitely have a really clean sound, with a tight high end and what seems to be accurate mid and low end. I've used these in a huge studio, one of the biggest here in Los Angeles, so they've also got main monitors in addition to these and also a pair of NS-10's. While I was definitely using the 1032A's here and there, I wasn't relying on them primarily. I would switch back and forth between the three sets of monitors a lot to try to get a more accurate picture, as these sound very good and can be almost deceiving. I'm sure with more use I could learn them pretty good, as is the case with all monitors.

The price of the Genelec 1032A is certainly going to be the first thing considered here as they cost a very pretty penny. They wouldn't be cheap even if the price was for a pair of these, and instead they are sold separately. Of course for a professional studio, a great set of near field monitors is necessary and spending this kind of money is also usually necessary, but I would recommend checking out a number of other near field monitors before deciding on these, as I'm honestly not sure they are worth the money. Perhaps it's because I'm not a huge fan of Genelec monitors in general, so if you are I'm sure you're going to think these are the best ever. For me I prefer monitors from ADAM, Dynaudio, and Barefoot, but as always it is a matter of personal preference - just be sure to do your homework.