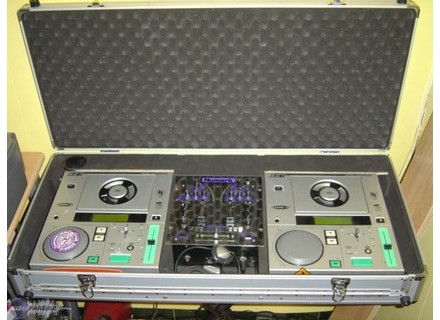 Cleving 166, All-in-one DJ player from BST in the Cleving series.

manu m's review (This content has been automatically translated from French)

BST Cleving 166
4
Hello all, made six years that I have. I used to mix (for the love of music), the era it was the bomb, now it begins Exceeds be. At the time I tried the Pioneer CDJ500 home that had a little the same CHARACTERISTICS prs, there was little of the technical diffrence except the price! That is why I bought a pair of cleving166 BST. TSB brand seem a little bit cheap but it has made efforts since the launch of this plate: it's more and more pro srieux. The report price is not bad quality and it's better than gemini. For the quality of the two plates there was no one who has problem (in fact she read the same CD-RW!, Unusual for the era!). The deuxime has led the pitch that no longer works if it works. In my opinion, use the play button can weaken heavy use. It still works well.
If it was I again do it again because this time the little money I had, now I will buy instead of having the Numark CDX touch of vinyl (note the reliability of Numark time! ! for reliability rather pioneer but less well for the touch). I put 8 out of 10 because it was my first decks to mix the CD and in 1999-2000, there was no CDJ1000 or CDX or SLDZ ...