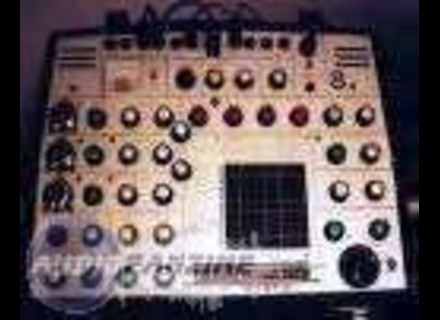 AKS
+ analog sequencer keyboard ....
nicknamed "the bag" is a portable VCS 3 ...
Synthtiseur collection of only 200 t were produced ... It possde 3 oscillators (OSC1: sin, square) (OSC2: square, triangle) OSC3 (it is a sub tilt frequency sawtooth and square). Obviously it possde rsons filter, a high pass cut down output, and a cut above the low pass output. It possde a system that envelope a bit unusual trapezoid with a mini spring reverb (INTERESTED) and essentially its ring modulator ... that we know mainly for its unique grain, used in music normment concrte .. It possde CONTRL a joystick, two line inputs, two mic inputs, two outputs plus two controls output .. ultimately, it possde Furthermore, a noise of gnrateur INTERESTED trs and first and foremost ... MATRIX connections .. this little gem is completely modular ... each element of claiver can CONTRL another ....
The novice may be surprised to dpart from ergonomics and the matrix of connections ... but it's exciting to discovering the prototype of the history of synths and understand the connections between diffrent lments ...

A logic and will integrate APRS you can make sounds trs complexes within seconds .. having had the chance to have the manual (should have kept a copy on line, you can sk me the way), I quickly understood the Systm matrix .. for the habitus of modular synths, no surprise, VCO, filter, envelope, output .. typically found the way to gnse sound .. temperatures requiring this much diffrencier signals CONTRL voltage audio signals etc ... short, time to adapt and APRS is pleasant, fun, inventive and hyper edition allows a single big sound crazy ... I'm totally a fan of this small matrix ... to confess, I t's because I thought it would be harder to understand !!!!!! simply gnial and ergonomic!

... Big synthse subtractive .... the small n in 1972 is a bubbling synthse .. thousand times more powerful than the minimoog, the Systm patch allows millions of combinations .. heat and power of sound is unique, the instability of oscillators provide the charm on keyboards ... I generally use the aks audio sources to deal with (the prampli is wonderful even if it blows through !!!!) filters, oscilloscope and especially ring mod and a lot of the synth to CRER parliaments ryhtmiques powerful, super groovy, and volumes continuously ... trs beautiful sounds of psychs are ditables, the fx, basses monos of death, or 3 leads oscilloscope ... the possibilities are wide trs .. grain can be hard if not totally hyper industrial ... the highs are Scaille, impressive, almost audible sounds UTRA, infrastructure can be controlled with pany !!!!!
Both say without dwelling THIS IS NOT A GAS PLANT THERMO NUCLEAR POWER PLANT BUT .... To give you an example, the only synth Submitted on DARK SIDE OF THE MOON is the AKS!! rcouter the album and you hear the sound .. You can Listen to the album "RUOK" Meat Beat Manifesto produuit only with the large EMS Synthi 100 (very close to the AKS, quasi indented) .. The EMS team as more proccupe Whereas by artistic avant-garde, and Aesthetics of an atonal and microtonal composition, the comfort of the player silent
anecdotal. The AKS silent destiny to express sound sculptors, explorers IWe spectra, and other composers concrte, plutt as "keyboard-heroes." Forcment, the sound .... it is an appointment !!!!!!!!
Users of madmen AKS:
Daniel Miller (Mute Records boss: Depeche Mode, Neubauten, Nick Cave, Vince Clarke ...)
Brian Eno (note the synthesis of HEROES with Bowie)
Pink Floyd
Chemical Brothers (Dig Your Own Hole! Y'en it everywhere)
Stereolab
Yes
Depeche Mode
Aphex Twin
Autechre
Jean-Michel Jarre
Astral Projection
Vince Clarke
The Who
Todd Rundgren
Recoil (Alan Wilder of Depeche Mode)
Freddy Fresh

Following what I have described, not boast about how a thousand times the MRIT this machine I'm in love ... I had two keyboards (with the double matrix) and I have a spare now that I do not because the love story is too long and painful with my AKS ... t was the first in Japan to rev brok expensive (5000 euros) I confess that I would not consider me unless I prfr Spare to the keep in my studio ... but alas, unfortunately, the existence and Ralite make it impossible to keep everything ... This synth is a UFO, I know nothing of equivalent ... I do not believe to be the only synth because it is the bedside of many artists ... Brian Eno, Pink Floyd (R. Waters) ... Previous or point ...
See the source
Did you find this review helpful?yesno
Cookies help us improve performance, enhance user experience and deliver our services. By using our services, you agree to our use of cookies. Find out more.