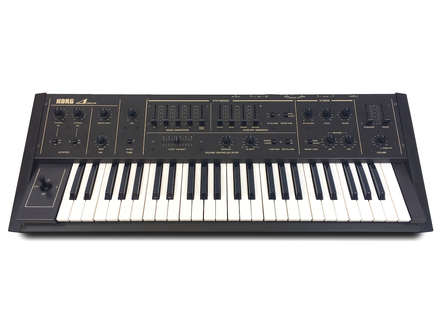 All user reviews for the Korg Delta

Korg Delta
4
Leaving the army (conscription), this is my first synth that allowed me to learn music and be part of a group.
it has served me well for the first balls in Normandy.
Pretty solid and simple programming, it might already be outdated at the time but with the immense fortune that I had not, I could play on stage without complex.
Very simple settings are accessible to all newcomers. not need the manual in multiple languages. Too bad there were no markers. But if we wanted to keep the memory of sounds, it was not difficult to prepare this index cards and register settings.
For me, even if it did not exceed the Trident of the same brand, it could be used for many things in public as well as solo.
Nostalgia can be!

Potentiometers directly at hand, we can not do better.

At first, like many people, I wanted to imitate other instruments.
But a synth for me as at the time it is first to create. There is not expected but here the splendor allows well learn sound synthesis.

Purchased in 1981; still works in 2014.
Even a washing machine BOSCH not yours as long.

9 of 14 people found this review helpful

oryjen's review (This content has been automatically translated from French)

Korg Delta
5
Keyboard to analog dividers. Two sections: Synth and Strings.
Total polyphony, but a single filter on the synth and a single VCA. PARA-so sound.

Simple in appearance, if it is a bit stuffy and we left at the front.
= Control function. no more simple and straightforward!
However, the Delta is a treasure trove if you take the trouble.
The manual encourages them to stay in front.

With some practice, the Delta is a very expressive instrument and quite versatile.
The strings are moving and rich, deep, dark strings ranging from the most scintillating sounds thanks to the great and radical crossover.
The synth has a big personality, with its 24dB filter consists of two stages in MS20 cascade.Non resonant filter factory but it is easy to remedy.
The four generators sqr 16 'to 2' provide access to a synthesis crude additive, but that can carve the wave with great accuracy! Much better than the traditional dial SINE / SQR / SAW / PULSE!
Noise.
Applying positive or negative slope on the filter ADSR (miam!)
Envelope on the punchy synth. We would have liked a real 0 Time Attack on strings, but I Motes ...
Keyboard excellent craftsmanship, much better than those of MS & Co.! Support fair and sweet.
Good connection back to a synthesizer dividers. No CVIN course, but the trig in and out, and separate audio outputs or collected for the two sections.
The joystick is a plus for the expressiveness.
Bonus: the two modes of TRIG selectable for each section, allowing lavish effects using both sections!
LFO delay in rudimentary but expressive (and not a real one SINE TRI) routable to pitch and / or filter, applicable to both sections.

I use it for 3 years (after having dreamed in my youth).
-Sounds and synthesis capabilities are excellent! To see the front panel light and airy, you would not believe he is hiding such treasures!
There is often a pb on the filter, easy to repair.
As poly-before it I had a Korg MP4, poly not really either.
-Value / price!
-Of course I would do this election if the divisors of mine came to let me go!

15 of 31 people found this review helpful

for caractritiques, much adj t said ... but some lack Technical Specifications:
- First, there is only one oscillator (as a Polysix, mind you), and harmonics are obtained by "trononnant" the source by a system that says "octave divider" - So the "unlimited polyphony" Delta is a legend, you can press as many buttons as you like and a adds a note on this but the envelope that is used is not applied (so you get a good old clingcling with a zero-attack in the middle of your pad / drone whose attack is at max if you press a note supplmentaire ...)
- Rsons the filter (there is only one, the well) is a joke it is so bland, but a simple rglage potentiomtres trimming of the machine can turn it into monster (you just remove the plastic covers under the CONTRL glissire that the filter have a screwdriver and some patience-not even need to open it !)... plus he knows how to lowpass and bandpass and basta ... not good ...
- The joystick is difficult and requires much utiiser really practice against it by the gnial it!
- The keyboard is a bit fragile (I also have an EPS-1 is in the same era and the problem is close) but it is against trs enjoyable if you like the kind touch real-plastoc analos the late 70s
- The same engine it is a strong Russian tank and is large enough to not look like a toy, plus it is beautiful, but it&#39;s got a case of
- It is by no means a synth modular or versatile ... He knows how to make synthetic strings and organ sounds typs equally synthetic and you can mix the two ... ZrO versatility, which

For configuration and use is a real analog korg so it&#39;s easy open door and all abuses: great!

The delta was intended as a hybrid between a machine type Arp Solina string synth and organ East, or as a very cheap version trident while the sounds ... there is a lot to say but I&#39;ll be brief:
- The delta is not flashing, the string sounds are less thick and less well ... but flashing is not worth 200 euros should I remind you and one flashing can not do synth at the same time ... and flashing c&#39;tait prvu to type disco strings (yuck)
- The delta is not a Crumar Performer or a spirit, it is not a real organ, it is not a real synth three oscilloscope

BUT it is a machine with a clean personality, especially if yours is not working properly and that the knobs "jump" like mine, which allows for the effects of ground trs trs surprising and used in IDM and glitch ... issue and make that look like sheets of synthetic super-organ out of a Cosmos episode 99 is World Champion

First, in talking about. If you are lucky, you&#39;ll find between 150 and 200 euros, which places it in the third head of the analos used the cheapest. In addition it is not uncommon trs, I saw at least four dj in good condition (I mean seen with my eyes, not seen with ebay)

Then talk about robustness: the delta is rightly rput be the most indestructible of synths in this era (the problem of knob above evokes rsoudre is easy if you have pleased with a little patience and a soldering iron, plus the synth will cost you even less because it does not work perfectly

because it is not rigged rubber contactors that hamper the Polysix keyboard or eps-1 and its buttons, sliders and zippers do not dpassent lot and are conveniently located. and more and I dj said, it is beautiful, damn it is beautiful. it is less beautiful than a Crumar but it is also easier to find ...

for sounds, well, it&#39;s you to adapt to him, because he is too prhistorique to suit you. for me is the best qualitprix analos typs of string / organ that I know and as a reputable bad (see the divider Systm octave above) is found easily and sounds are not too overused and not too Muls or imitated - and the joystick, it was something! It does not compare with a trident, a flashing or a Crumar Performer (or even with an organ elka) as I said, but it is 2-3 times cheaper ... on the other hand if you want a glandular sell 400 euros "because it is a vintage synth", you can advise him to sell back on ebay ... In short, if you see one its normal price, you buy it and you rflchirez tomorrow, at worst you can always sell what you pay.

to conclude, as is said elsewhere, if this synth had described it "moog opus-3 &#39;instead of&#39; korg delta &#39;, it would be much more expensive and would have much better reputable ... but at the sound, not as a sr change much

yaneve's review (This content has been automatically translated from French)

Simple and accessible in real time ...

This was my first synth ... and we shared good times together ... far from the noon of computer music which certainly opens up new opportunities, but you sometimes forget the basics: music

profondo rosso's review (This content has been automatically translated from French)

Korg Delta
4
Without preset synth with two sections one and another sytnhé srtings. Envelope trigger pos. and neg. no effect. joystick. Unlimited polyphony

Using simple hyper even without manual

We are faced with a real analog synth. Section formidable.c synth really is a sound that will not betray you. hit easy. good potato. fantastic in addition to other synths (obviously). rather limited use though sometimes out of good bass and srtings so naive. ^ synth and super cheap.

I use it for a year. I almost sell it but you get home and we won. excellent value for money. damage is missing still a good controller noon but for the time it's a great synth. about 150-300 euros