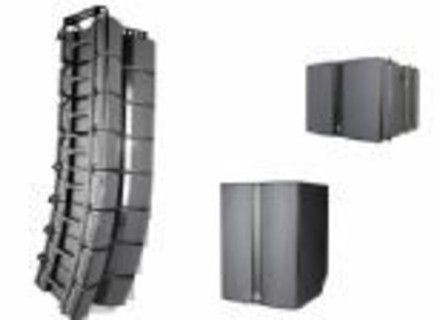 As a mere front of house engineer, I’m not claiming that I can judge something from an acousticians’ point of view. Also, I’m a partisan of the separation of the Church and State, or for that matter of dissociating people who study and design gear from those destined to be the final users. A good mixing engineer is not necessarily good at knowing the tech behind it, neither does the holder of a physics PhD. necessarily know how to operate a mixer – different skills for different jobs and different people.

So, my review is only that of a final user on his personal use of the X210 in its most basic setup, as originally the audience was not supposed to exceed 5,000 people.

I’ll only talk theory very little, yet enough so as to make my point.

I had never used or heard this system. I already owned a 206 which satisfied me, and had heard the previous version of the 210.
So, I was to take a risk, with no safety net, working on a brand new rental Array.

When it arrived I observed it carefully.
The big flycases open in two parts, only the trolleys are left, allowing a single person to move it easily.
Inside the flycases were 4 active heads and the bumper. Everything was already fitted and wired.
The overall weight didn’t exceed 150kg (333 lbs), which is 37kg (82lbs) per head.
The –also active– double-18” subs are covered with covers that let the handles out for easy access. The trolley-like roulette wheels remind me of the old Cerwin Vega crates. They’re very practical to move the 98kg (218 lbs) of each of the subs.

The speakers are supplied using sturdy Power Speakon cords. Setup can be accessed through a numeric keypad which appears to be waterproof. A blue display allows to control the setup process. Two RJ45 plugs allow for network connection and deporting the setup to a computer – fo doing so just chain the whole, ala DMX.

Once everything was out, I looked at how it was built. The job seems to be rather well done and matches the technical needs of a line. What I mean:

Anyone who knows a bit the line array concept will tell you it’s not only about stacking boxes to get a cylindrical field like a source line.
So my modest advice is only valid in the case of a WST-compliant setup (see Christian Heil’s study and conclusion). I don’t want to get too deep into that theory thing, but I’ll still need to enounce this “norm” so as to justify my opinion on the Master X210 – I’ll try to speak a plain understandable English and to make it as short as possible.
A little reminding on two or three aspects of the WST (there are others):

The surface of the various speakers and horns must be approximately 80% of the line. As the Spanish brand is known for its reliability, I won’t check it myself. The Master X210’s surface is covered with 10” transducers, protected by a sturdy grille and a reinforced cloth dustcover. At first sight, the 80% figure is easily reached – obviously a good thing, though not always respected by the cheapest manufacturers.

The speakers and horns must also be as close to each other as possible, with a distance lower than half a waveshape. This vital condition is reached easily for the low freqs as they provide a high-value waveshape. As for the high frequencies, the distance between two horns must be almost non-existent (a quarter of a waveshape, which is only a few millimetres – almost nothing – at 15kHz). Merely observing the X210 reveals a sturdy yet delicate woodwork, and the problem of the high frequencies is solved using precise-sounding, DOSC type horns which go through the front part of the box to fit perfectly in the following cabinet, with no space lost due to the wood. So, that second criterion is matched, too!

Hook systems are important for creating a source line from array speakers. While robust, they must allow the speakers to fit with perfect accuracy, hence maintaining the shortest possible distance between the speakers, in spite of the angle given to "aim" at such or such part of the audience. The Master hooks seem to be made of stamped steel, and are equipped with a key for the articulation. The key is a convenient piston model which prevents any accidental or unwanted removal. A sling allows to avoid losing any part when disassembling (these slings seem to me a little fragile on my MA206).


I'm talking about pins and hooks because, without going too deep into the details on the wavefront’s curvature, I can tell you that the accuracy of the mechanical adjustment is vital for building a source line. And, as this phenomenon allows to double the range, it is the very reason for the existence of the Array systems. If incorrectly calibrated, they will sound like pans, whatever you do! If you can’t keep it under control, then you’d be better off using a traditional audio system that will give a more natural sound.

As a whole, with this Master system, I considered to be able to create the desired long range cylindrical soundfield.

The heads’ horizontal openings are given at 120°. If you don’t know Le Dôme, it’s a room with a very wide opening.
So, I completed the X210 system with my small 206 from the same manufacturer, which I stacked, quartered, on the stage – it was to cover beyond the announced 120°.


An included software and the possibility to create an ethernet network allow both the mechanical and audio monitoring of the system – practical for newcomers, but also for others.

As I didn’t know the system, I decided to remain prudent and calibrated it without taking the first ten meters before the stage into account. I had two X15LT, so that was well enough to attenuate the lows in the pit – in the end they proved to be particularly efficient.

The 210 head were hauled by 30 ft using engines, while the 218 subs which don’t seem to feature a hook were arranged down the stage – so they were to broadcast a mere mid-range spherical waveshape. I counted on the heads to send more lows on the far side, as their cutoff freq was given at 70Hz and I don’t have 215s designed to work in an upper cluster.

We calibrated the system using the very easy-to-use Master software. The level and EQ data, proper to each cab, got transmitted instantly, allowing for quick tries. I tend to be quite circumspect as to the use of computers for gigs, but I had to admit that the calibrating process was going well, so, I just swallowed my pride and abandoned my front-of-house mixer's EQ knobs.

The test was performed using CDs in different music genres. The range was good (over 40 meters – a little more in yards), and beyond that distance the 218 subs were getting clearly soft as their sound pattern is spherical. The manufacturer claims it’s possible to reposition the 218s “back to back”, which is to sensible add to their range but I only learnt about this afterward and did not get a chance to try it by myself.

In this setup, 50 meters away from the stage, the lows came from higher as they mostly emanated from the heads. However, at such a distance, the sound remained very powerful and distinct. The high freqs were clear, so were the mids and the overall sound was perfectly balanced.

Just for fun, I tweaked the EQ a bit and felt a perfect response, even from far, allowing for a hi-fi sound reminiscent of your living room in a 10,000 venue.

I was surprised by the headroom. In the end, the audience reached 8,500 persons, and the gauge indicator didn’t even reach -10.

Le Dôme hosts 200 shows a year, the people working there are used to see huge sound systems, much bigger and more expensive than this. So while we were setting it up in the morning, they were looking at our eight boxes half-smiling (while exploring the venue two days before, I had been impressed by 24 arrays from a famous brand hanging from the ceiling).

So, I’m not the only one who was converted on that day.

Considering the quality and headroom with such a minimal setup from a little-known brand, I wonder what the sound engineers from the day before did with their 24 boxes and how much they charged for it.

In the end, I consider the system to be perfectly designed and balanced. The speakers are lightweight, the onboard electronics makes using it as simple as it gets and the price is more than reasonable – no need for a century-long leasing plan. The doors to grand stages are now open to small professionals like me. I’ve used the products of many a famous brand, and I can’t think of any difference that would speak against the X210. Also, after I had lost one of the bumpers of my 206, I was delighted to see how Master’s customer service did all they could to have another one delivered to me right in time.

For a lower price, I shall naturally turn toward this X210 system in the future when I’m to invest.

I also can only wonder about the manufacturer’s need to oversize the sound systems like they do. Without that, perhaps tickets for the shows would be more affordable, resulting in more work for us…

Bruno, from Artec (in Arles)
Did you find this review helpful?yesno
»