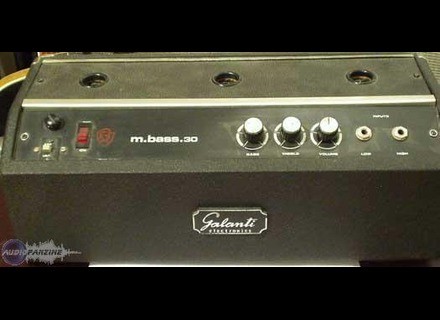 oliverix1's review (This content has been automatically translated from French)

Galanti M.BASS 30
5
It is a 1974 amp lamps, originally designed to boost bass and organ, with just two lamps. The power is 30 watts that really tore the ears!
On the facade, there are three rglages: volume, treble for treble and bass, two inputs for the low: high and low, a standby for the lamps, and ... That's it! but ca is more than enough to find his sound. Originally, the head works with a cabinet with a 12 hp, the one I use, with a facade that looks very much like woven silver Portaflex ampeg B15 in the era ...

Bought used for as little, I mean modest sum of 400 euros, this amp sounds extremely well Dfine prcis and trs, this level of precision, we can not think that ebs or swr ... The sound is vintage and tipp lamp and sounds good with all the basses I use: an ibanez 1969, ibanez a 92 and a peavey rcente.
Its copnfiguration is very simple, really do not need a manual, and the amp, under 35 pounds, is easily transportable. Question power, it is equivalent to the minimum 200 watts transistor, and does not saturate, even high volume, which is 40 hp cash without flinching. What this amp quality is impressive, and the amps ampeg relgue era of the rank of playthings without her .. say it! since I know well ampeg ... (Svt head ..)
This amp is rare and difficult to find, but he trs age well, and really gives her a trs own, ideal for RPET, the studio and small gigs.
I also put 10 for the simple reason that I have never seen the best of my sound and reliability issue begins CF career.

I play many styles of music DIFFERENT, and this amp fits well with everything, and with a face prsence phnomnale for example, two guitarists plus a drummer who bangs .. From jazz to funk, to rock see vintage rock, it sounds! mtal and why not? in this case, 30 watt would be somewhat limited, but the sound ... one can easily find his red hot, Rage against, or System, it's done in sound quality!
Rglages allow all the extreme, the treble ptard allows acute, many acute 7 or 8, avoid ... but the sound can really be clear, just as a great depth, I'm a fan!

APRs have tried quite a combo, I can say without dtour that it is the best it outperforms the working-SERIES pro SWR, and is at least at the WorkingPro 15.
I t is trying to buy new, notament The series B100R or B200R Ampeg, but the trial c'tait really bad, and when it is known that two ampeg has a hard e life of less than a year ... prfr I invest in a tool that has not aged in 36 years!
Pay 400 euros, I could have put double or even triple knowingly! in fact it is invaluable my eyes and the eyes of many listeners bassists jealous!
With experience, yes, yes and yes again, I would do this choice, the hard part is in a dnicher, especially one for sale! becaufe me, even death, I would not sell it!

10 ... need I say more ... it is far from the old ide amp collector, we are facing a marvel, and for the reliability of construction, and above all the simplicity I do not think he fell on an isolated attempt to Emergency!

CusmarB's review (This content has been automatically translated from French)" bluffing"

Galanti M.BASS 30
5
amp unknown until then ... with a config hybrid transistor preamp and tube power!
and yes, a 12AX7 and 2 EL34. in short, a little weird on paper.

you tell yourself quickly with three knobs, it will go quickly to resolve, and maybe not.
the volume pot to low and very effective, even to cut a little at the end of acute stroke ... really surprising that equalization, and in the best sense.

Be careful though in buying this amp, if not reviewed by a pro, he can kill you, like that.

Once installed a good ground, then we laugh.

He did everything we asked ... the sound really depends on the hp put behind ... at the base, he toured with a HP 12 'into 16 ohms, but with its internal configuration, it can put an 8 ohm no problem, the output transformer perseveres.

it sends whatever it takes ... 30W bass? NO, not only!, I put everything I want, it does not budge one bit. In my opinion one of the best cheap amp I've heard. it is a little head to do everything, light, well thought out. all it takes to get to the point.
It is also very rare to find, which is why sometimes the price, which after all is largely justified.