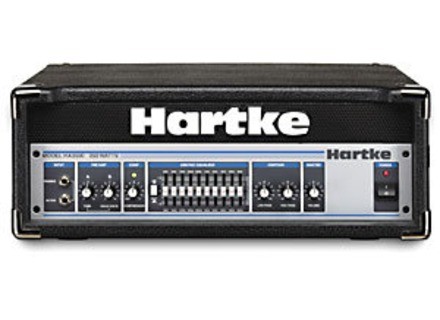 warrior8's review (This content has been automatically translated from French)

Rletourneur's review (This content has been automatically translated from French)

Warning I agree with all the opinions cits in general on sound qualities of the gear set apart for the XLR output! Big disappointment to the recording studio from the XLR gouache not have to push the bottom of the knobs and Pramp not record breathless! The sound is too rotten to the output XLR I wonder why it presents if out something as rotten!

RAS
Did you find this review helpful?yesno
»

Hartke HA3500A
3
Hybrid
450 W into 4 ohms.
Compressor questionable effectiveness. Slightly better results are obtained depending on the quality of the 12AX7 preamp.
Effective switchable EQ, etc ... everything has already been said

No need for manual
Simple setup, intuitive and easy. Fiddling equalizer, we arrive at what we seek ... if you are not too demanding.
Provide castors.

Quite versatile. But as we are not in the high-end, low quality is required. Please note: the breath, if you send too much treble (with the correct EQ).
One advantage is the ability to connect one or two speakers by location. The best for this amp is to add to it a 4x10 '+ 1X15 ... but all should be around 80 kg and a suitable vehicle. Forget it if you ride smart.

I bought occas not expensive, it is 1 year and I do not regret it. The sound quality is average, but sufficient for the "all comers." The power is sufficient for most performances, even outdoors. Think well release the rear fan power part (transistors) despite the fan heater. I changed the original (too noisy). Disadvantage depending on the state of your kidneys: weight; Class D amps have accustomed us from 14 to 3 kg!
Avoid if you often move.
However the price / quality ratio is unbeatable especially occas.
Did you find this review helpful?yesno
»

Ogmor's review (This content has been automatically translated from French)

Hartke HA3500A
3
Hybrid amp with a preamp running thanks to a 12AX7
You can connect one speaker 4 Ohm 8 Ohm or 2 in parallel (jack plugs) for a power of 350 watts.
Can be assayed power preamp tube preamp and a transistor, handy.
The compressor is really there to race.
The equalo is effective, but on my amp, it is Pietre manufacturing: it is now unusable because it crackles a lot and very strong (fortunately it is possible to bypaser)
Also a filter Hi and Low
Two inputs: an active and a passive

Grip without particular difficulties, there are not 10,000 controls, you just have to be patient with equalo as with any graphic equalo. But this amp is good if you have a small budget and we want to play in a group, but it is very limited in the sense that it is still "flat". However, no pb power is sufficient WIDELY!

It takes time to sculpt sound on equalo graphic, but it is always the case in this type of gear.
I play it with active low (an old version "Cort Artisan" MightyMite with microphones, and LTD f-404 with EMG 35DC), mostly metal. I would say that the sound does not really personality, but it complies with the sound of the instruments given to him. It is okay to play in groups, out of the mix, we can sculpt the type of sound you want, but it sounds flat, wondering if the lamp plays a real role. That said, the sound is better when you put the preamp tube in the afternoon and a transistor quarter.
This allowed me to make the sound much better is the use of EBS preamp tube "drive valve" in the effects loop, it really all raiser. That said, this says more about this pedal on the amp ^ ^. Moreover, a word to say about the possibility of equalization: the equalo graphic is convenient, but since it is unusable from now on, the valve drive is now indispensable. Certainly less versatile than equalo graphic, but so much more efficient, it provides a real personality to the sound compared to the equalo amp (this is more noticeable in the effects loop).
In any case, keeping in mind the price set in this amp (around 350 euros nine at the time, from memory), it would be naive to expect more. And it has the advantage of respecting the instrument: if you plug a good bass, it feels.

I mostly used at the beginning, I needed for my first group (sudden death), and it has helped me out. But it has not been my intensive way over a year and a half. Thereafter, when I integrated my 2nd group (black metal), I had the amp a buddy provision (a fame all-tube) which, although it was not perfect and was also small budget, really liked the color and personality. That said, the Hartke is more "manageable", that is, we can better sculpt different sounds with a simple equalo 3 bands (especially if it is of poor quality, as is the case in fame).
So it's a amp input range, but I managed to pull something pretty, having only one of these "cheap" in my equipment: a good bass, a good speaker (Ampeg SVT HLF 410) and thereafter on good preamp (ebs valve drive).
However, given the strength due to sloppy construction, I can not say whether it is good value for money: the graphic equalo dropped me after what I consider to be a relatively short use (2-year break everything) and low intensity. I do not see the resell condition, and it will serve me again. As I do not have more money, it convendra me as extra amp, because it is not awful, but after a while it aspires better! So for a small budget necessitating the gear to at least play in a group, if possible using a good quality instrument, it can go, but if you can wait to take sth better, I think it will no money lost!

Did you find this review helpful?yesno
»
Read the 12 user reviews on the Hartke HA3500A »