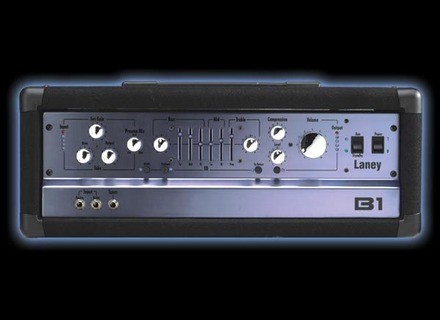 B1, Bass Guitar Amp Head from Laney in the B series.

Laney B1
1
i bought this bass head for about $2500aus. from my local music store in Cairns Australia. it was a new line they were stocking and i wanted something quality and reliable that would last me many years.

it has plenty of power.(too much, i lost a few speakers running it in bridge.) it has lots of pretty blue lights and can pull a good sound without much effort.

the head blew up in the first few months i had it. it went in for repairs under warranty but took 6 months for laney to supply parts. the music store told me laney admitted they had a problem and were sending a revised board. the amp lasted another 6 months but slowly lost power and buzzed through the DI.it eventually blew again and has been in the shop for the last 6 weeks with no response from laney.

very poor quality. in the repair shop more than out. as a working musician it is very hard finding a replacement for the amount of time it is being repaired.

take this as a warning. do not buy this amp. lucky it has a 3 year warranty. i am currently trying to get my money back. even if they were to replace the head with a new one tomorrow i would not want it.i do not want to own this amp when it is out of warranty. the store i bought it from will no longer sell laney amps.

Laney B1
5
I bought my Bass in UK. It is an Absolutely mazing bass and i reccomend it to anuyone!

Its got great sound quality and just all round amzing!

[9] as the footswitch is not included. Otherwise the head is hyper complte.

Not the configuration is not simple, it takes time to tour this bte, as its sound capabilities are increased. Add this interaction existing, even if some of the teachers DIFFERENT knobs and it is like the lottery: in front of millions of possibilities.

The sound comes naturally. But finding the setup that suits the style well be asked to play sound connatre his gear.

The sounds fit any style.

The sound is just beautiful and can not be covered by the sound of the guitarist or drummer.

DI output provides a warm and harmonious output to a PA (attention, the case of DI remains ncessaire, the signal is pre-prpar the head).

The bright switch and his sidekick can quickly and efficiently sculpt the sound, for example, round sound and give it a surplus of heat for a piece SPECIFICATIONS or conversely, give his attack for slapping .

Distrust: extreme power even reaches the end of the ability of a 8x10 "

APRS toy too expensive to me, not my APRS bassist.

Other users of me reports of reliability problem with their head, it's not my case. 1A works for 5 years now, but I burn my 8x10 russi "in him too Balanant potato.

[3] is that Laney B1 draisonnable all points of view, too contrlable too adjustable, too powerful. Too frankly suprieure sound. The cult of too much. According to its priorities, the overall score will change, but the head draisonnable par excellence.
Did you find this review helpful?yesno
»