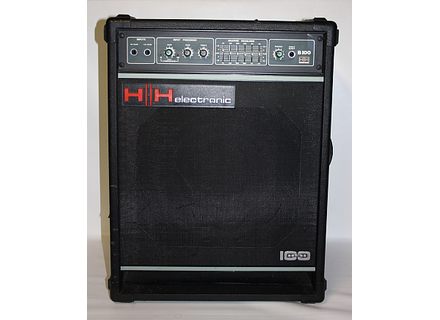 HH B100
5
Hi all
To correct many mistakes that have been called the b100 bass amp and the BASSAMP, they do not use MOSFET transistors but the simple 2N3055 to 2N3773 B100 and the other for bipolar transistors so I have proof an already disassembled the B100 and I official schemas bassamp

The bipolar transistor is much faster than the Mos attacks are more punchy live the Mos drags a bit more anyway great amp and speakers that happiness HH shame we find more ...... .....

tweeter is missing on this amp

The design of the electronics of the amp is simple but you can bouriner it's a real tractor that goes far beyond a basic amplifier circuit integrated supposedly more powerful ..... but had not acquire too much

Basic usage.
One branch, the rule two knobs and it sounds

Versatile enough although oriented rock. I even played with the reggae.
As for the slap against it a little pity, unless you have a new ropes.
Good definition, just medium.
The 15-inch serious cash. Watts are damn present for an amp of this size

I have 10 years.
This is my favorite amp to play rock seventies. He has an inimitable sacred grain for a transistor. Unless directed to seek an amp slap it crushes small amps like 100W Hartke, Warwick and company ...
It's simple, I owned a Hartke head with a box 4 * 10, a fender head, a head Ashdown, I sold them all.
I never wanted to sell the HH.

Given the age of the beast, while Jack is.
In short, the whole kit bass player is there.

- Simple configuration, of course: you play the bass.
- The sound remains, despite the possible settings, of Rock. No tweeter ... By cutting off the compressor and the amount of gain, a distortion appears, very warm and Rock.

Certainly not for the slap while climbing in the treble knob and equalo, a good slap sound is possible.

- Great sound for blues, rock, reggae, bass with p'tit grain reminiscent lamps. For crystal-clear sound, you pass ... It's big, round, fat, whatever you want but not crystalline.

- The bass is well defined.

- Used with a low fitted with two humbuckers, it sends.

This amp is a British production, HH brand that was bought around 1989 by Laney. All the gear is pre-HH 89/90, I think he said. The serial number is engraved by hand ...

The date of my 88 or 89 and except welds that were done, it is original. So tough. Before buying it, I tried a multitude of sub-crap Chinese inspiring little confidence. A € 60 + € 40 repair welding is a bargain. Look on this site, the head alone is estimated at € 300. The Argus this combo € 80 seems be a certain error.

The sound is awesome, the 100W is there, the real watts, not watts Behr ****. Electronics MOSFET is extra and easy to tow. Rock is typed, very friendly to me it sounds better than the new "Rumble 100" or other 100W amps prize usual marks (Ibanez, Ashdown, Fender, etc.)

Cons: The body is made in a thick wood and strong: it is because the wheels graft side handle you will not be of any help in terms of its 27 kg

HH B100 manuals and other files