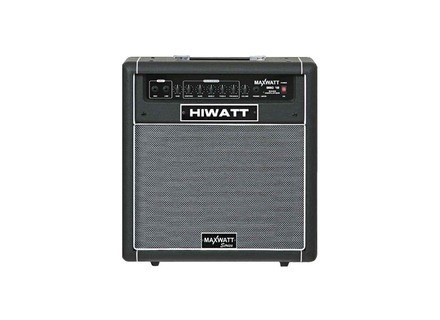 B60/12, Bass Guitar Combo Amp from Hiwatt in the Maxwatt series.

linn134's review (This content has been automatically translated from French)" I Fane!"

This is a friendly amp rather immediate to understand.
The duo "Gain" and "Volume" does not work as in Trace, there is really no need to push the gain for the sound. But the interesting thing is called "Limit".
A simple indicator (red LED) on the front informs that it works. It is always in action and is set by the "Gain": the higher the gain, the higher limiter is present.

This is both a quality and a defect, it is preferred according to a certain or a neutral character. This amp has character. In the same way we love Trace and we accept the way "so british" which works the preamp, this Hiwatt works with a permanent limiter is like that.

The four-band EQ is musical, not really radical but accurate.
I have not yet tested the headphone jack and the second speaker output will not serve me.

The sound? Aha. Yes, this is where we seriously question.

Is it your style of music?
Yes, but with a real personality.

What kind of sound you get and with what settings ("crystalline", "bold", ....)?
Lens not quite, we always stay with a soft side even if it is very clean (hi-fi). No sailing on a smooth sound, but good quality in very high frequencies. Despite all this happening. The fat that is not difficult, and the 12 "is certainly effective. But it is a Fane, the HP product and designed by a specialist who does not date from yesterday.

With what (s) guitar (s) / low (s) or effect (s) do you play?
Before buying it I decided to test it with a good old Yamaha BBG4-A2, April 1 active strings with two Soapbars who are actually P-Bass in a format "big licorice." I also tried a Squier Vintage Modified JB Maple Neck on the Hiwatt. If you do not know the Yam 'BBG4A2 you can not ignore the JB most top home Squier. In both cases it is affordable low (600 euros for Yam at the time, 300 for the famous JB).
In my case I connect this amp three shovels cool: Yam mentioned above, an Epiphone Thunderbird IV, a Fender Precision Custom Doll Garage.
In short: it sounds!

What are the sounds you prefer, you hate?
Apart from the ultra modern Hartke Transporter that B60 is capable of anything and rather well.

How long have you use it?
Since today, but I've spent hours and this really is not my first amp. The only thing I can reasonably talk about is reliability, for the rest I know what I am concerned.

Have you tried many other models before buying it?
Many with the only real limits power and sound.
I had a lot of bass amps: Trace, Gallien, Glockenklang, Ampeg, Warwick, Fender, ...

What is the particular feature you like best and least?
Sound, that's what makes this a good amp B60.
I would have liked an effects loop, at least to a slight reverb.

Quality / Price: really good. Good luck finding one.
And be careful, there are at least two versions of B60 12 ", not all have the same HP, it is written on, open your eyes!