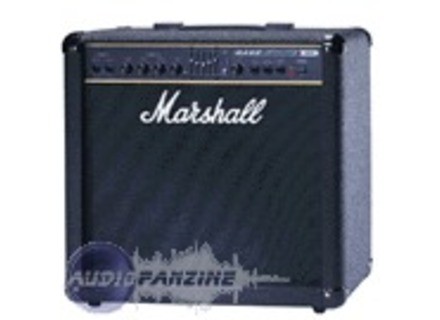 B65, Bass Guitar Combo Amp from Marshall in the BassState series.

The sound is not at all accurate, there is a grain particular we feel that it is tailored to make the rock, it still is not worth a grain Ampeg must be not screwed, the 5 band EQ allows some awesome sound but what ... more it's not going very far, 5 Band is still very light
The integrated compressor is not worth a good pedal, it is useful to start then when we have a good pedal EBS or other types Comp immediately that the amp seems very feeble
Slap in the game rendering is very average, to play blues or rock where it does a little better, but here is what ...

This is a good amp started in the apartment 65W are sufficient for this purpose, and after that group died with a drummer and a guitarist is not even worth thinking about
Marshall is very good especially for guitarists, after Bass is not there or they are the best, it's not worth SWR, Ashdown, Ampeg ... brief specialists Bass amp, if it is not again I would do it, and it is better to save something, I should also after it is all the same price

THeAnGelZ's review (This content has been automatically translated from French)

- Ah yes, I find it very versatile.
- I play a Cort GB something, and qq effect Bricol home.
- I love this amp bcp on the possibility of having to heat the acute ds. Otherwise after with the settings you can have anything you want.
- I like the nice sharp

Just a small line on the group repeated the ac amplifier, cranked it takes a little near the battery but it starts to hit it starts to be fair, but hey it's feasible and quite satisfactory if the group not play too hard, and I'm qq for months. So it's on that have not adapted to the super super group play, that's why if I bought an amp I would take QQC more powerful.
Qd and is even larger, it is barely smaller than the Trace Elliot 715 150w of local do with a cake of 15 ", but hey I'm moving now.

babus caesar's review (This content has been automatically translated from French)

Marshall B65
4
I do not return to Las dtail CHARACTERISTICS.
Amp 65watts transistors
5-band EQ
Compressor
Satisfactory for this type of hardware, but now there are more complete

Trs routeRANK simple because of the limited rglages. It comes with easy sound INTERESTED especially when you rock joe like me. Manuel unnecessary given the simplicity of the device.

It should trs well to rock and pop. I think it will do well in many styles even if I did not really try.
I put 9 because I do not know about the slap. Jemais essay and it is not my thing.

I bought a few months time. I do not regret at all.
It can be used for 150 and it's suddenly a good buy because the price the nine APRS many EEnter He is doing well despite its age trs. So good value quality price if it achte between 100 and 150.
Now we must see that this is not a 500 W Trace home or Gallien Krueger so it will not work miracles. But to play at home, it is more than enough.
I would do without hsiter choice.
Did you find this review helpful?yesno
»

This amp does not have: DI Given his age, is normal.

Config extremely simple, like all good bass amp. The sound is huge for a 65W, not so much by the power delivered, quite modest, but this amp is "right" even pushed into a corner. No feedback, buzz, tremors suspects.

The transistor's no shortage of heat on this workhorse. Low soft and round, sharp slap. The comp and the équalo help sculpt the sound you want. Nothing to say.

It complies with the various low, active or passive they fit inside.

Used in recent weeks, this amp is entirely satisfactory for work at home. His true watts and its ability to remain "law" should enable use as a preamp stage or before the PA (for those playing online), because the sound is excellent, either as part of a music not too upset (genus acoustic guitar + bass mounted flat yarn), without a drummer or his modest power will be offset by the sound free of distortion.

He replaced a horrible **** Behr 300W on which I worked and who made me doubt my babasses every time.

9 because it lacks an ID, an outlet baffle Supp, who might have been nice (for ptites scenes). But to hit Euro 99 ... This is a detail.
Did you find this review helpful?yesno
»
Read the 5 user reviews on the Marshall B65 »