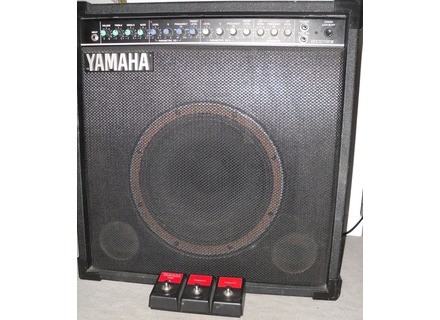 Yamaha B100-112
4
Amplifier 100w 8 ohm (99dB), transistors, HP 12'' it includes a fairly comprehensive connectivity options and settings for an interesting combo:
- Front:
- Input jack single instrument,
- Classic Settings: Volume / Treble / Middle / Bass;
- 2 parametric EQ: Level / Form / Frequency / Preset Level;
- 3 settings for a cross-over to a separate bass and high frequencies to an external amp amplification;
- Rear panel:
- Outputs for two speakers, one is taken by HP combo, but it is de-connectable and has its own jack if you want to use HP combo on another amplifier, conversely can connect a second HP for greater dynamic
- Output adjustable DI,
- Preamp output and power amp input for an effects loop,
- Both high and low frequency outputs configurable front panel for separate amplification.
The amp is accompanied by his pedal selection parametric equalizer channel. Ultra handy when juggling between passive and active low (see below).
His weight is not to overlook: it weighs 35 kg. But it is a sign of strength and quality.

The configuration is easy for a basic setup. But the strength of this amp is to allow a choice of parametric EQ pedal and associated level when we alternate between an active and a passive bass. It is more disconnected on the head amp input between Passive / Active but simply changing parametric channel foot after changing guitar.
Of course, the power of this amp is intended primarily for work at home, but it has accompanied me on a few scenes and was never ashamed to face other models for prestigious brands, especially given the opportunities recovery by a general sound.

The amp has a fairly neutral tone, leaving it to the lower and associated effects to give the desired extent. HP 12'' is just an intermediary between the 10 or 15''. I use several low, both passive and active, and as stated above, no worries management through two channels switchable parametric foot.

I use it for many years and it is always attack. It was my first choice and I have remained faithful to him despite the passing years. Treated with care, stored in a warm, still promises me good years.
In the category reproach, I could mention the limit to 100 w, but as mentioned above, they are now and have never failed me. By connecting a second HP, we still gain in power, but I never tried it.
In balance sheet quality, scalability, reliability, a true Swiss Army knife from Japan.