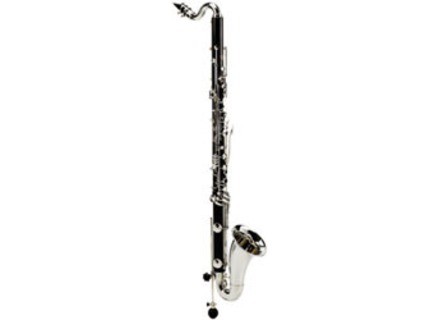 Flöten Lusthof's review (This content has been automatically translated from French)

Buffet Crampon Basse 1180 Bb
4
Bass clarinet grenadilla up to Eb, with a simple registry key it was the model for the study of Buffet Crampon until some years ago. It is no longer manufactured since.
Bought used a few months ago, I played almost every day since in band and chamber music, in groups of traditional music and the instrument courses. Before that, I played for years on an old Pedler a bit rotten ... I feel rediscover the instrument!

Most:
- Very soft and comfortable keywork, which falls well under the fingers.
- Good intonation, very homogeneous.
- Beautiful tone, especially in the bass.
- Possibility of adding a low D key on the roof and a double registry key (the chimney is already there).
- Well balanced, which is far from negligible when, like me, often playing up.
- Case solid, comfortable to wear, protects the instrument well.
- Presence of a picnic to play seated.
- Good performance of keywork, which disrupts a game despite some intensive and extensive travel.

Cons:
- Down only Eb ... Fortunately, as I write above, you can add a key re.
- Some strangled acute, it takes a bit for stuff inside out round and full. It will certainly be better in a few months when it will be a little open (the guy that I bought almost did not play).
- Support of thumb does not quite: it is adjustable in height, but the screw that holds it tends to relax when the instrument is a little "worn" on the go. It never happens when playing seated, obviously.


For the price that I got this instrument is placed far ahead of resin models from Yamaha and Jupiter. Nothing to do, a wooden instrument, that changes everything!
Obviously, compared to a Selmer Privilege in C (which I often do), the Buffet sounds less "big" ... However, for an instrument of this range, I would do without hesitation that choice.
Did you find this review helpful?yesno
»