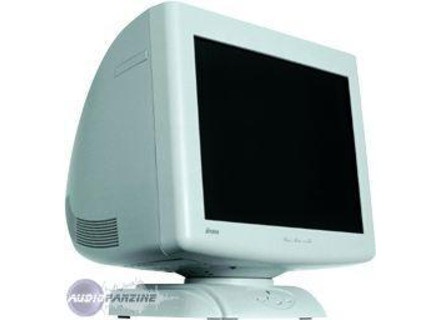 fred806's review (This content has been automatically translated from French)

Iiyama HA202DT
5
I use it for more then 2 years. Very robust, always as accurate by now.

I tried other screens, 19 "including, Iiyama, Sony, ViewSonic, which were not as fine or performing in terms of cooling. So I invested!

The little extras: a built-in USB hub (useful for connections or the mouse on the desktop), and 2 switchable video inputs (video1/video2), useful if you have two PCs and a screen ...

The value for money is true but is not exceptional, it still pays to quality.

In retrospect I think this screen diagonal is the best choice. Now it may well be content with a 19 "CRT or even 17 or 18" TFT ... Matter of taste.

Update: I dropped the screen after two years. Still under warranty (3 years on site), I replaced it a week later with a new one (he had none other in stock). Even finer level of quality. Provided it lasts a long one!
Did you find this review helpful?yesno
»

ze_zuper_divx's review (This content has been automatically translated from French)

==> I am currently with a notch that I can use as it hurts the eyes
I expect to move IIYAMA to replace me because it has less than a year and not a hardware j'espre refurbished dffectueux
Did you find this review helpful?yesno
»

luther's review (This content has been automatically translated from French)

Iiyama HA202DT
4
I use it now for two years PRS, not a problem.
Always clean, precise, a value for me, his little practice internal USB hub and two video inputs that can switch from one PC to another ...
Did you find this review helpful?yesno
»

Other categories in Computer Monitors