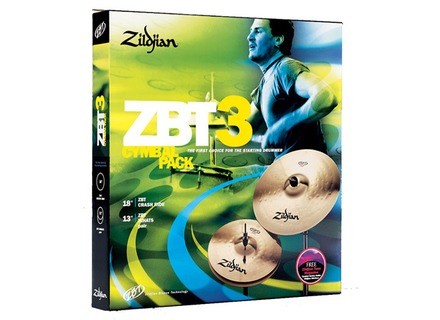 All user reviews for the Zildjian ZBT 3 Box Set

Zildjian ZBT 3 Box Set
2
Zildjian zbt's are ok as a starter cymbal pack.  These sound a lot better than the stock cymbals that came with my first drum kit, but not by much.  These are cheap, and have pretty great value.  This is their best attribute.  Any drummer who wants to seriously gig or record also has to realize that he/she will probably want to get rid of these after a short period of time.  That is why the low price is good, they can be used as a springboard.

As far as the sound goes, I have never been impressed.  The crash is ok, very loud but lacking in any desirable character.  It has a reasonably fast decay and any noise remaining after a few seconds is undesirable ringing.  It does not respond well to light strokes, so it has to be struck hard to sound decent.  The ride is absolutely disgusting.  Even through hard rock, it sound bad.  The ugly overtones and ringing is rough on the eardrums and the surface sounds way to stiff.  Even when playing with wood sticks it sounds like plastic tips are being used.  The saving grace of the ride is the bell, which actually sounds ok.  The hi hats are the highlight of the pack.  They are the most important cymbal for beginners so this is refreshing.  They have pretty good volume, stick definition, and chick.  They mix with music pretty well, and I have actually seen them in use more than any other zbt's.

I don't mean to be to harsh on an entry level cymbal set.  They are a good value for what they are.  For a price like this, I am a bigger fan of Sabian b8's, which have a much better ride and crash sound.  Honestly, I would avoid entry level cymbals alltogether if possible and just save for good ones.  I did, and i thanked myself later.  The mere fact that these are in a box is suspect, because unless they can be played extensively before purchase I wouldn't suggest buying  any cymbal without hearing it.  This pack is mediocre.
Did you find this review helpful?yesno

darkstar91220's review (This content has been automatically translated from French)

Zildjian ZBT 3 Box Set
4
Hi!
This set of cymbals, made two years that I train,
The crash ride is nice, we'll have to buy a quick ride or a crash as well as a single cymbal is RELOUUU xD But if not, even though it is a crash ride, she filled out its asser r The back and forth. For the Charleston, my point of views, it is gnial for "entry level" even if it is not the first price, I plan to buy two cymbals, a crash and a ride, while keeping the zildjian crash ride in crash, but no desire to buy a hat. J'espre you have very clear on this product, A + PEOPLE !!!!!!!!!!!!!!!
Did you find this review helpful?yesno
Cookies help us improve performance, enhance user experience and deliver our services. By using our services, you agree to our use of cookies. Find out more.