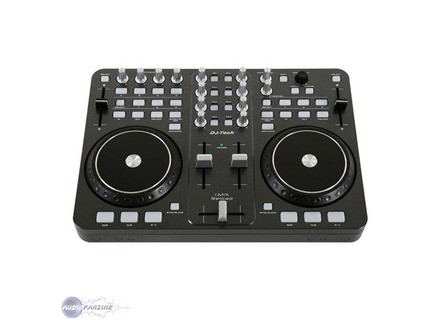 View other reviews for this product:
Dj tech i mix is ​​a twelve o'clock Controller to control a DJ software such as Traktor or Vdj. This is an upgrade version of the mix i. Compared to the base model, we gain 2 jogs and pressure sensitive buttons and knobs supplmentaires ddis to Contrle effects and loops.

The Controller comes with TRAKTOR LE, Deckadance, documentation, USB cable and its stro card as a USB key.

The object is made of plastic because trslger, jogs however have a portion Mtal. It is relatively compact, which will fit nicely in a aisment Type laptop bag for transport.

No need drivers spciaux on windows XP, the surface is automatically recognized in connection.

First highlight the jogs are relatively large and fluids (slightly larger than those of a VCI-100). The habitus touch pioneer will find the classic touch of a good CD player. Actually put hand size, we really feel to manipulate a jog CDJ. We put the hand on the jog, the music stops as to enable the scratch, while a touch on the altre decide the tempo of the current song.

The pitch faders are ongoing but prcis and especially very hard which quickly dplacer of them just by touching them as a Xponent example. Note that the sensitivity of jogs is adjustable thanks to the knobs to the rear of the console.

The knobs of EQS are relatively hard, we therefore use the Kill prfra for legalization of violent change.

I do not use the crossfader but the curve of the latter is adjustable as jogs to the rear of the console.

Some buttons may light up, which allows you to see the status of a deck directly on the console (lit for play, ect ...) and checks to see if a deck is curly or Switch-on effect. 3 colors available, red, green and blue.

During the mix with Traktor, surface RGIT very well, so it is possible to mix with as we mix a CDJ1000 example, despite a shorter pitch fader. But the fun is. The interest of a surface is the total Contrle of software, so it does not touch the mouse, allowing a truly ergonomic grip a program like traktor.

You choose your track with an endless knobs, one load and press play, as in real ddi stuff. The buttons s'clairent are a real plus for them find among the many contrles.

The main point is ngatif the plastic shell that does not inspire solidity unlike a VCI-100 with a shell Mtal. To see how the surface will age so.

The sound card is supplied bundled a little cheap, too, a real sound card it will therefore s'quiper for best results.

THE surface is self feeds via USB or can be plugged into mains via a non supplied adapter.

For less than 300, this is the first product for srieux-controlling a soft dj, and sensations during the mix are very close to the pro stuff.

So it's an interesting product for its price and allowing the passage to the high range without much change habits, provided you do not use auto sync of course.

Here is a mix RALIS on this console, the tracks are blocks without auto sync.

https://www.native-instruments.com/forum/showthread.php?t=81882
See the source
Did you find this review helpful?yesno
Cookies help us improve performance, enhance user experience and deliver our services. By using our services, you agree to our use of cookies. Find out more.