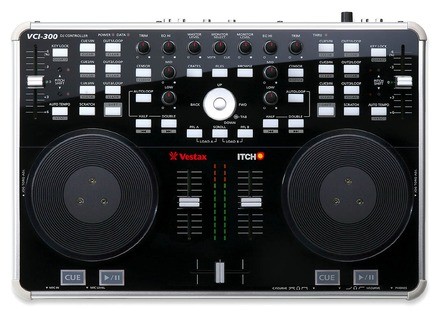 VCI-300, MIDI Control Surface for DJ from Vestax in the VCI series.

Product replaced by the Vestax VCI-300MKII.

View other reviews for this product:
(Originally written by /translated from Audiofanzine FR)

One month of intensive use.
After hesitating a lot, I chose this control surface to mix my hip hop/electro/d&b MP3 files without having to carry around two turntables and my vinyl records.

Pros: jog wheel precision! You can pitch the speed of any track by slightly tapping the sides of the jog wheels, and the results are as good as with vinyl. Scratching feels almost the same as with a real vinyl record, although, it's true, you need some time to get used to it. The crossfader is terribly good. The mixer is really sexy. It's big, solid and the pots are not cheap... nothing to complain about, it's a Vestax! The Serato software is somewhat basic but good: I love the graphic interface which allows you to see track scrolling, making it perfect for track matching.

Cons: the software has no effects for individual tracks and you can't even insert effects since the mixer works with its own sound card! Some delay, reverb, flanger effects would be much appreciated. I hope the next version does include some new effects so I can rate it 10/10.

I also tried the VCI100 which works very well but doesn't have enough precision and is too small!

I know it's not cheap, I bought it for 660 euros after bargaining at the store, but now I have the MP3 mixing tool I had always been looking for. Nevertheless, don't forget that you get a Vestax mixer (with a very good croosfader) + a sound card + a mixing software, all for the same price.
To wrap it up, this is the best virtual mixing tool I've ever used.
Did you find this review helpful?yesno
Cookies help us improve performance, enhance user experience and deliver our services. By using our services, you agree to our use of cookies. Find out more.