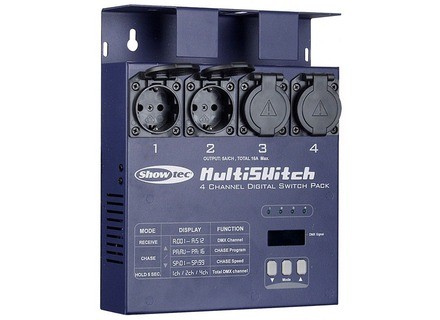 Showtec MULTIDIM MKII DMX
4
This model resists more than the new genration MKIII.
It is possible to put 1000w per channel, which is strongly discouraged because the MKIII must change if the triac continuously.

For my part I change my park by MKII MKIII.

Showtec MULTIDIM MKII DMX
2
I bought this block for power wiring by 64 7 500Watts, the first use I loaded 3000 watts for 40 minutes just to see if the block was the result once blown fuse and the fuse protects the cable around, not time to return used as a performance I change the emergency cable fuse holder and fuse (I put a 20 amp). over problem. But obviously this equipment is not reliable, I bought it because I had another block nicols 4x5a 220 volts which I was very happy, but that was not in stock when my order. In short, the nicols did 250 performances showtec smoothly and not even a rehearsal.

Showtec MULTIDIM MKII DMX
I use the multidimensional MK2 few years now.
I have not tested other device before lessayer because I ordered on the net.
I like simplicity of operation, it is made to convert a DMX signal power signal and that's all that matters to me.
However after a few years of use and some transports off flight case I must say, I'm getting channels that merdent (1 per unit, as I 2)
The value for money is interesting
I think I remake this choice, or why not another brand substantially equivalent test history ..

Showtec MULTIDIM MKII DMX
4
I use it for almost 2 years.

Big minus: the sockets of standard German taken when it was taken as the old me impossible to insert without changing the tip.

Not really big plus, it is plug and play and easy to speak, like a dimmer base must be what ...

Annoying thing in my opinion: the channel status LEDs whose light output is proportional to the signal being sent. To squeaker squeaker, this is nice, but the discretion is not won at full power as it illuminates a small flashlight ...

I use in parallel on the RVE prestas Cube, obviously there is no need to even make a comparison. Curve graduation Cube is better defined, it sends less noise in electrical distribution and has individual protection per channel, but it is a pro camera and it's not the same price.

One of the cheapest in its class, the present Showtec still in my opinion a great value and a good reliable and efficient device that wants a basic 4 channel dimmer without taking the head pro aspects. Mine works perfectly and has never given any sign of weakness.

So in summary, good product for basic use I make I would do this choice without hesitation. If I want something more professional, I would look at RVE.
Did you find this review helpful?yesno
»
Read the 11 user reviews on the Showtec MULTIDIM MKII DMX »

Other categories in Dimming Packs