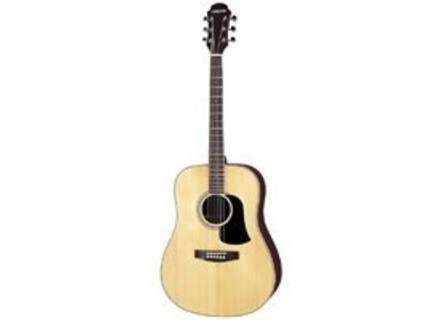 Aria AD-35
4
This particular dreadnought made by the Aria company is an almost exact copy of the famed Martin D28. I have sung the praises of the real deal for many years, so when I stumbled across what looked like a genuine D28 aside from the name and country of origin selling for $300 used, my interest was piqued enough to give it a look and a test run. It features a spruce top with rosewood back and sides, what looks to be a mahogany neck, and a rosewood fretboard with 22 frets. It is equipped with a standard Martin style rosewood bridge and a set of sealed chrome tuners. I'm not entirely certain on the country of origin but I believe this guitar was made around 2006, most likely in China.

This guitar basically feels and plays like a Martin guitar. Mind you, the setup on it wasn't stellar but regardless, I could hear the tone and sense that it felt close to the real deal. The weight is medium and it sits on the body quite well. Dreadnoughts are not the easiest guitars to get around for someone of a smaller body frame such as myself, but that aside I would say it's not un-ergonomic. The upper fret access is okay, but there's no cutaway to really get beyond the 14th fret, so it's sort of a moot point.

Getting a good sound out of this guitar is as simple as strumming it. Seriously, that's it. It has a very thick low end with a pronounced midrange and fairly subdued highs. Despite having an extremely high action and what must've been two year old strings... it still had a thunderous and full sound, great for bluegrass tone.

I particularly like the guitar for it's Martin esque tones and feel. It's not exactly like a D28, but it is close enough that for $300 I was shocked. The Martin has a stronger sound overall and seems much louder. The Aria was generally a quieter guitar overall, but it could've been the old strings/setup too. Granted, I'm pretty sure the Aria isn't all solid wood so that would have a pretty serious effect on the tone compared to the Martin. Overall it's a great rhythm and lead guitar, and also sounds wonderful in open crossnote tuning as well.

All in all for the $300 or so used that these guitars can be found for, it's a bargain. They are hard to come by (this is only the 2nd one I've ever seen for sale near here) and when they sell they sell quick. Many of these Martin and Gibson copies are extremely well made guitars for not a lot of dosh, and this Aria is no exception. Well worth looking at if you want a D28 for almost 1/10th of the price of a new one
Did you find this review helpful?yesno
»