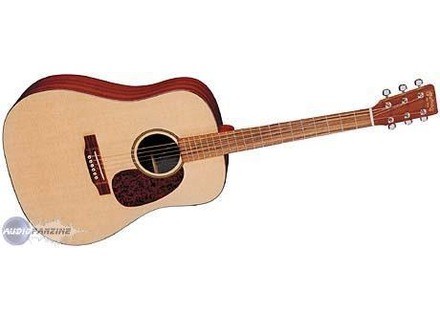 I paid about $500 a couple years ago. I actually submitted a review on this unit when I bought and just wanted to check back in and give an update.

The laminate top seems to be a feature most complain about, but honestly other than the fact that it is laminate, I think the guitar sounds fine and plays well.

Quality and build seem very consistent. The guitar was made in Mexico, but don't snub it because of that. With the right Quality requirements and direction, those guys can build a great guitar.

Overall, still very pleased. Although I'd love to have a much higher level Martin, I will continue to get years out of this one. For the price, you can't beat i.

Martin & Co DXM
4
Been playing now for about 25 years. I'm one of those guys who started off by learning Stairway to Heaven and after that it was history. I play everything from rock and country to heavy metal and some blues once in a while. I'm an on again off again player I'm ashamed to admit. Usually get real heavy into it for a while and then bail for months when I get too busy to settle down and relax. Love to record my own stuff too. As a matter of fact, I probably do more creative work than actually sitting down to figure out tunes. Although with summer here, I definitely want to get my backyard patio jam set together for some good sing-along action.

I bought this Martin DXM Dreadnought at Guitars Plus in Wexford, PA. I stopped by the store after the gym one day just to pick up some strings and maybe a capo, but when I saw a Martin hanging on the wall for $449, I couldn't resist.

What do I like the most? Hmmm... would have to be the price, action and sound quality in that order. Getting a Martin guitar under a grand is a great thing, even if it *is* made in Mexico. The materials are not the same, obviously, as you would expect in guitar priced much higher but the fit and finish is really good. I would expect that Martin has issued good quality assurance guidelines to it's Mexican manufacturer(s), so even though it's made there and with different materials, it still feels good and plays good.

The action is great too! This is probably my second favorite thing about the guitar. For a guitar in this price range it feels really good. Not as good as some guitars in the $2k-$3k range, but what do you expect? This was basically supposed to be a campfire beater for me, but it's so smooth it's quickly replacing my old Ovation Celebrity as my preferred acoustic.

Finally, the sound quality. The dreadnaught body helps produce a nice big, warm sound. Finer details like harmonics and string slides are still present and overall it's just a real nice tone in an inexpensive body. No complaints here.

Well, no real dislikes about this guitar except it's pretty plain looking. Even in this price range they may have put in some embellishment or inlays, just to make it an unbelieveable value, but honestly - who cares. I'm not playing it because it looks good and it's not going to sit on display somewhere so I'm not worried about it. That's really the only thing I have to pick on after about a month of playing it so far.

Construction and quality seem first rate for a non-US produced instrument. Frankly, some of these foreign manufacturers can do it quite well as long as strict quality guidelines are issued to them.

Overall, it's a great little guitar at a great pricepoint. Of course, the C.J. Martin name on the headstock is nice, but it's really the playability and tone that is impressive. A really good value is sometimes hard to come by these days and even though it's not a U.S. made guitar, I really didn't want to drop the dough for that in this case. Maybe someday, but not right now. Can't be pleased enough with my new Martin DXM.

Martin & Co DXM
4
The Martin &amp; Co DXM is dreadnought acoustic guitar that isn't an acoustic/electric, so it doesn't have any pick ups or setting controls.  The body of this guitar is made out of both wood and polymer and the neck and rest of the body is made out of some sort of laminated material, which is the reason that this guitar is so cheap.  Like all Martin guitars, this was made in the USA and I believe that it has somewhere between twenty and twenty-two frets.

The overall feel of the Martin &amp; Co DXM is pretty good.  While it doesn't compare to the other guitars that Martin makes, it is definitely playable and isn't uncomfortable on the fingers at all.  I would just say that is lacks a certain fluid feeling that is prevalent in most Martin guitars.  However, of course this is trade-off that you make with a lower end guitar.  Getting a good sound isn't too hard as this guitar definitely has a full bodied tone that is perfect for a wide variety of music.

While this of course doesn't have the same sweet sound that has made Martin famous, it definitely has a nice overall.  It is full bodied and overall pretty thick sounding.  I have mostly used the guitar for practicing on as I don't own it and have used a friend of mines.  I probably wouldn't recommend this as a primary recording guitar, but for live shows and practicing this is a perfect guitar for someone on a budget.  It is suitable for all sorts of music that you would want an acoustic guitar on including rock, folk, pop, and country.

I first used the Martin &amp; Co DXM about a year ago and was immediately impressed with it considering how cheap this guitar is.  While a guitar at this price will never sound as good as one double or triple this, it overall has a pretty good sound is easy to play.  While I wouldn't recommend the guitar for professionals or experienced players, I would definitely recommend it to someone looking for a cheap acoustic guitar that still sounds good and is playable.  I would have expected the Martin &amp; Co DXM to be a lot more than it is and because of this it is definitely a good deal and is a guitar that all beginners and intermediate players should look into.

rhi-zome's review (This content has been automatically translated from French)

Martin & Co DXM
5
A Martin affordable! It is of course manufactured in the USA. The finish is flawless, beautiful aesthetics. The neck has 20 frets

The handle is very nice, it is very easy to play

I used to play country blues picking. Its sound is very full, very warm, very low present. His only flaw in my opinion: its lack of sound power, but it depends what you search.

I served for three months and I am delighted with my purchase. My second guitar is an electro-Norman whose sound has nothing to do, and they complement each other perfectly. I found the quality / price excellent and if the purchase had to be redone, I would not hesitate one second.