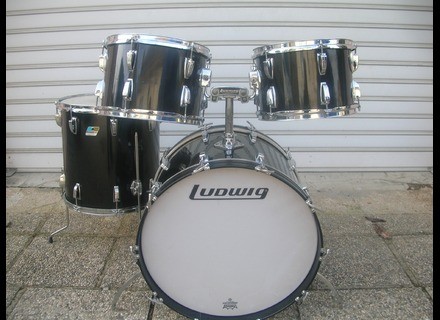 Ludwig Drums 1971
5
This is a phenomenal drum kit that we have at the studio I work for. I would say that it's among the best I've played. It has phenomenal tone and can really apply to a wide variety of music styles, from rock to gospel to jazz to pop and R&B, as well as country and folk-rock type stuff. While there are a ton of great newer kits that are perfect for rock music, they don't really come close to this one in terms of versatility. While the actual sound of the drums isn't really all that different from song to song, it's just such a great sound that it'll work for pretty much anything. You can leave it up to the engineer to make the drum sound better for different kinds of music, assuming you're recording with it. I'd stick to studio use with it as these are pretty old nowadays and you don't want to damage it as they aren't exactly replacable.
The mark of a great drum set as far as I'm concerned is that it sounds remarkably different from player to player. This kit is a perfect example of that. You put a funk drummer behind it, it sounds funky. You put a rock drummer behind it, it rocks. It's as versatile as the player behind it, if not more so. Tuning it differently isn't really going to mess it up or change the sound too drastically.
I'd say that it's definitely one of the more expensive drum kits you'll find, considering it's age, it's build, and the Ludwig name. But it's definitely worth it if you are looking for the best. The only competition it has is with other old Ludwig kits, which are just as good, as well as other vintage kits that are as awesome (of which there aren't many around).
Did you find this review helpful?yesno
»

Ludwig Drums 1971
5
I've been using a 71' Ludwig drum kit for recording sessions for the past year and I can't say too many good things about this set. It is built well and it sounds incredible. The kit I use has a kick drum, snare drum, and rack tom and a floor tom and all of these drums sound brilliant. They are sturdy, covered in sparkles and are really easy to get a good sound out of it. While I am not a drummer, I have used this kit on a ton of sessions and I always get good results. The kick drum is heavy and fat, the snare is almost perfect sounding, and both tom toms are full sounding. While you can tune the drums, there isn't all that much flexibility in the sounds you can get, but the inherent sounds of these drums are great sounding enough that it doesn't matter too much. Just about every drummer, most professional, who has come in and played this kit have absolutely loved it. They love the way it sounds and the way it feels. I haven't heard too many drum kits that sound better than this one, only ones that are different sounding, but this kit is just about as good as it gets. Being that this kit is almost forty years old, they are not that easy to come across but while they are rare, they are not impossible to find. Not sure what the price of these would be, but if you come across one of these, definitley check it out! This is one of the nicest drum sets I have ever used, both in terms of sound quality and overall look as the sparkle finish is easy on the eyes and impresses the clients! Ludwig has a reputation for making some of the highest quality drums, and this '71 kit is prime example.
Did you find this review helpful?yesno
»