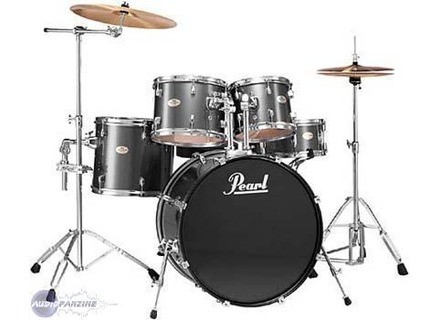 Forum Fusion 20", Drum Set from Pearl in the Forum series.

Pearl Forum Fusion 20"
4
The Pearl Forum Fusion "20 is a drum kit that is suitable for use in any scenario, whether it be in the studio, on the stage, or for practicing. I recently recorded this drum kit as an engineer in a professional recording studio. A client brought this drum set in, and wanted to play on his own kit, which of course is understandable, otherwise I would have used a different drum kit. The 20" refers to the size of the bass drum, and I believe that the Forum Fusion comes with a bass drum, a snare, a floor tom, and two rack tom toms. This definitely is not a professional's kit, as it's best for mid level players or beginner's who might have more than a few hundred bucks to spend on a kit. I can't speak about the feel of the kit since I didn't get a chance to play it myself, but as far as the sound goes, it's about average and isn't really anything to write home about. The drummer had put new heads on the kit, so I think we were getting a pretty good idea of what the kit sounds like when it's new. The bass drum isn't really very tight sounding, as it's pretty boomy in general, which can be helped for recording with a few pillows, but on it's own it's way too boomy for my taste. We didn't use the snare drum, as we subbed in both a Black Beauty and a Pearl Piccolo for different songs. The floor tom is probably the best sounding of the tom tom drums, but the rack toms just aren't tight enough sounding for my taste. I guess that the Pearl Forum Fusion "20 isn't made for recording, so if you're just using it for practicing it's certainly more than adequate, but if you're considering a kit to record with, you could do better. The price is definitely a huge part about this kit, as it's very affordable. It's going to be adequate for intermediate players and below, but if you're an experienced player who is recording and gigging, you're probably going to need something a bit better...
Did you find this review helpful?yesno
»

Alexis B.'s review (This content has been automatically translated from French)" Effective."

Toms are not drilled and detailed sound, with a nice sustain and honest.
However, I changed all the skins of strikes by Remo pin-stripes for toms, powerstroke 3 for the bass drum, and an Emperor for the snare. the skins original sound correctly, but are very fragile.
Drums have a good original sound, since I do not matifies: it sounds natural, and it's clean (no unpleasant harmonics).

As provided in the kit cymbals, sell at the price of metal, it will at least something, because it is very light, see bad. In short, we must invest in brand cymbals.

The accessories are correct.

By dint of settings, I could get a sound very good, since we have taken studio confused with the "trigg" digital, it sounds so clean and well ... in a metal style. But that requires taking the time to properly adjust its drumkit, and have a frank hits.
In the club, without sound, it sounds. In big room, wired for sound, it sounds too.

I would not recommend it for jazz. To rock a little tough, it's good.
There, biensur, much better, but it's more expensive! Here, we are not stolen, it's effective.
Did you find this review helpful?yesno
»