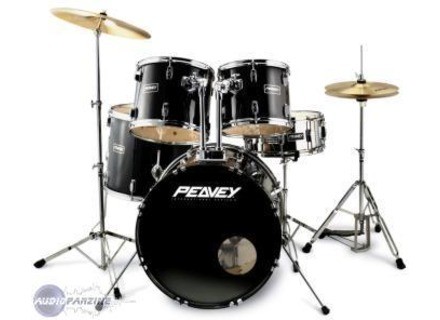 Peavey International Series II
5
This is an amazing drum set for beginner-intermediate drummers. The drums sound great and the hardware is good also. I really think people underrate basswood drums because these drums sound awesome. The only thing that I would change is to get rid of the stock heads and cymbals and get new ones. Other than that it is a great set!
Did you find this review helpful?yesno
»

Peavey International Series II
5
Personally, I think this is one of the best sounding beginner drum sets out there.The basswood that is made of gives it a very full, satisfying sound. The hardware and the cymbals that come with it aren't the best, but the get the job done. I would recommend getting a new hi-hat stand and bass drum pedal as soon as you can though. Also, the heads that come with the drum set don't sound very good, so upgrade those soon as well. Overall, this is a very good beginner drum set.
Did you find this review helpful?yesno
»

Peavey International Series II
3
I bought this kit from a music shop in Grimsby, England. It cost £279 in the Xmas Sales .The main reason I bought it was because it was so cheap.

I liked the fact that it was so inexpensive and it was a good starting package as it comes with all the hardware, throne, sticks, cymbals, etc. The choice of colours are also quite good (I chose the metallic green colour). When I first got the kit I couldn't find any faults with it, but as I got more experienced certain things were starting to bug me about the kit.

There are quite a few things that I don't like, such as the snare. It sounded really bad and no matter how much I tuned it it refused to make any half decent sound, until i replaced the factory head with a Remo head (which at least makes it bearable). The toms are okay, but I highly recommend replacing the factory heads. Also worth replacing as soon as possible are the cymbals that come with them, they sound a lot like hitting metal dustbin lids. The hardware is okay, but flimsy.

The quality is what you'd expect for a beginner's kit. It isn't great, but it could be a lot worse. The best made thing of the whole kit is the straight stand, which is actually very sturdy. The bass drum pedal broke after about three months. The lugs look, and are very cheap. The wrap is starting to come off the bass drum rim. The toms are quite well made though, the bearing edges are straight and smooth, and the rims sit well on the edges. I suppose it's held together pretty well considering i've had it for 7 months.

This kit is well suited for a beginner that isn't too sure how much commitment they'll have. It's a good stepping stone from beginner to intermediate/pro drum kit (I am currently waiting for my Yamaha Beech Custom Absolute to be delivered any day now) as it is cheap so you won't be spending too much on the beginner kit.

I like that it's a full kit at an affordable price, its the perfect purchase if you are a beginner with a shallow wallet.

What I don't like is that the ride and crash are put together into one unit and will need to be replaced after you get the hang of playing it with a seperate crash and ride.

It is fairly good for the price. You are getting what you paid for consider how much you paid for it. It seems to be build fairly solid I think it should last for a while.

It is perfect for beginners that don't have alot of money or don't want to spend alot of money on their first kit. Because of the quality you can play long enough to learn the basics but you will probably want to buy some nicer parts over time.

This review was originally published on http://www.musicgearreview.com
Did you find this review helpful?yesno
»
Read the 8 user reviews on the Peavey International Series II »